My last post here was on May 10th. It took me multiple weeks to pull that one off, and that wasn’t even… like… a real post. I figured I had one or two more posts in me before the baby arrived – a summer reading list and something else. So I got to writing that something else – a lovely, timely little post about my “quarter 1 reading”… now that quarter 2 is over and done with – and started dithering over what books I might want to read over the summer. And this summer would certainly require extra dithering. I’m not known for actually completing my summer reading lists during the actual summer months – last year I read three (the Han, the Cline, and the Offill) and felt pretty accomplished – but who’s to say I’d be able to finish *any* books at all this summer?

Since I would be presumably a home-bound invalid, recovering from the wilds of childbirth with a newborn tethered to my breast, I decided to focus on reading some of the books from my growing To-Read Shelf – aka, books that wouldn’t require more than a few steps across my teeny tiny apartment to acquire.

Speaking of teeny-tiny apartment… of all of the myriad anxieties associated with my pregnancy, the WHERE THE HECK DO YOU LIVE IN BOSTON WITH A BABY question was definitely the most troublesome. I could really write a whole, boring, rage-filled post (novel?) about the situation. Just about a week prior, we’d decided, finally, that our best move was to stay in Chateau Teeny-Tiny – we’d ignore the lack of square footage, the lack of lead testing, and the somewhat discriminatory provision in our lease that required us to inform our landlords of a pregnancy in favor of stability, (relatively) teeny-tiny rent, and dealing with slight deception of the landlords we have rather than deceiving a brand new landlord. Or buying a condo we can’t afford.

Then along came something I’d heard of but never thought I would see in my lifetime – a true blue Boston Real Estate Miracle. An apartment – an unlisted, deleaded, in the city (a job requirement for me), barely-more-expensive-than-Chateau-Teeny-Tiny, HUGE-ASS apartment. And it was just down the street!

So on May 24th or so, we started packing. On June 1st, I left for work from Teeny Tiny Apartment and came home to our new address. I was just about 37 weeks pregnant, so not exactly equipped for manual labor. But I channeled any nesting energy I could muster and for a week and a half, I packed, I unpacked, I arranged, and I scrubbed. I also went to work full time, had two doctor’s appointments, a baby shower at work, finally took a Labor and Delivery tour, broke my iPhone and replaced it, went to City Hall to get a parking pass, paid my electric bill, filled out my maternity leave time sheets, and ate about 2 million Tums.

On June 9th, my water broke. 28 hours later, this little boy made his entrance into the world. Two full weeks early. 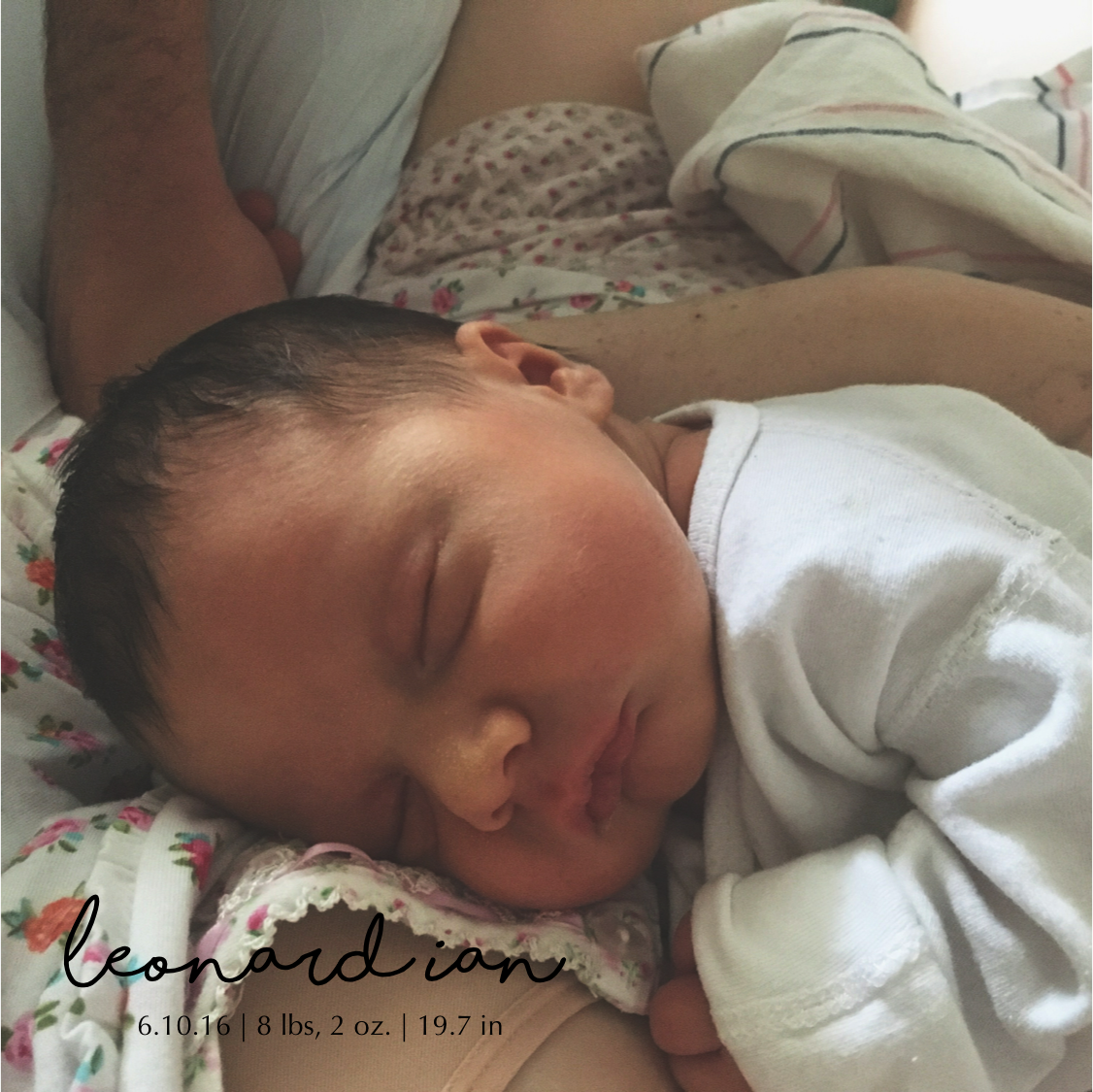 This is all to say:

A) I have no idea what is going on in my life or the world and haven’t for a number of weeks (months? years??)

B) That shelf of unread books that was going to make my Summer Reading post so easy? Up until two days ago, it was somewhere in this mess: 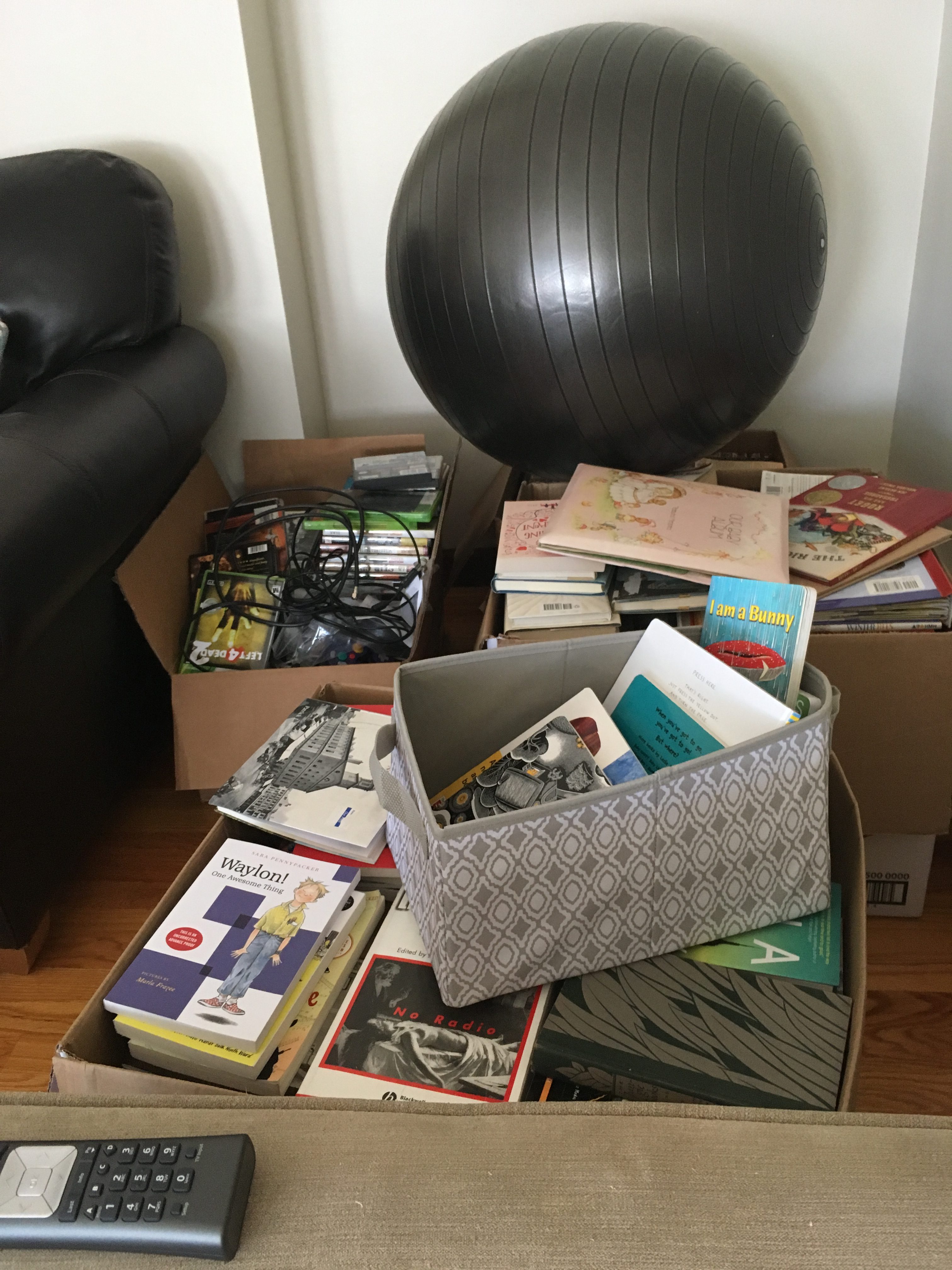 But never fear, my faithful readers! I am just three weeks into this whole motherhood gig, but I have found the time to score three bookshelves on Craigslist (for 25 bucks!), excavate that archeological dig of a library, AND throw together this arbitrary list of books that I may or may not actually read this summer.

All while keeping an infant alive! I am clearly superhuman.

So, without further ado, I present to you…

Alright, let’s get the Mommy Blogging out of the way first. In terms of informative reading, I spent my first trimester in a protective shell of denial and read only horrifying medical information from Dr. Google and the excellent Great With Child. Second trimester, I dipped into a few childbirth-related books. Third trimester was all about breastfeeding (shout out to The Womanly Art of Breastfeeding! My original skepticism still stands, but I also felt fairly informed once it was time to get started.) But after just a few days of caring for this little guy outside of my body, it hit me that I have to like… parent him all the way from squishy, hungry, sleepy baby all the way to grown-man-dom. What the what.

So I did like, 2 seconds of Googling and Simplicity Parenting recommended on two or three different blogs that seemed aligned with my general life philosophy. And that was that. I’ll let you know how it is. Hopefully some time before grown-man-dom hits, but given my track record round these parts I make no promises.

At the end of 2014, I threw together a booklist I called “2014 or GTFO.” The idea was that in any given year, there are a handful of YA and children’s books that are getting buzz, attention, conversation, and potentially awards. If one wants to stay current, then read these books or GTFO. I’m throwing this children’s title on my list this summer in order to feel smug and satisfied when I inevitably write my “2016 or GTFO” post this November.

Okay, I’ve got to cut this out.

A Moveable Feast by Ernest Hemingway

Hey, here’s a book from that shelf of To-Read books that I yammered on about for a few thousand words up there! I’ve read Hemingway short stories but never a full-length work. This is a memoir about his writerly life in Paris that I bought *in* Paris, and I really ought to read the special books that I buy in special places instead of putting them on display.

First Bite: How We Learn to Eat by Bee Wilson

So, I just happened to notice that this is the second book that I juuuuust posted about. Not terribly surprising, given the nature of the previous list and also my mental capacity. Also, this is another sort-of-parenting book. Oops. Sorry.

With Malice by Eileen Cook

I went to ALA Midwinter in January with the same goal I’ve had at the last few conferences I’ve attended: acquire zero books. I failed, of course, but this credo seems to help me acquire only the juiciest of titles. Eileen Cook’s With Malice made the cut. The Italian setting appealed to me (love the cover) and the plot summary has a We Were Liars vibe. Also, a positive review from Janssen. I’m sold.

(Hmmmmmm… maybe I could just re-read We Were Liars instead? This is why I never finish summer reading lists, guys…)

This follow-up to Alexander’s Newbery Award winning The Crossover fits not one but TWO categories – it’s surely a 2016 or GTFO title, AND it’s also another galley that’s been sitting on my To-Read shelf since January.

(Also, it’s a novel-in-verse for middle grade readers. So it’s short. I’ve got a newborn, guys, I’m not above stacking the deck.)

Semi-related fun fact: I wrote a professional review of Alexander’s debut YA novel and I thiiiiiink my review is quoted on the back cover of the paperback edition? I seem to recall discovering this while shopping at, of all places, Shakespeare & Co in Paris. It could have been a different book, though, so I might be lying.

A Feast For Crows by George R. R. Martin

Jessica, you are re-reading Game of Thrones AGAIN?!? What is wrong with you?

Oh no, dear imaginary, accusatory narrative voice that shows up from time to time to harangue me on my own blog. You are incorrect. You see, I’ve read and re-read the first three installments of A Song of Ice and Fire. But. I never actually got around to reading the last two.

After I read the first three, I thought that if my darling husband didn’t read the books, I might have to divorce him, so I launched a successful suggestive campaign. Now he’s read Book 4 and part of Book 5 and the tables have turned. I hereby commit myself to making it through A Feast for Crows this summer lest I destroy my marriage.

Saint Anything by Sarah Dessen

So after I moved in, birthed a baby, acquired a bookshelf, and assembled my To-Read bookshelf, I took a gander and decided the best place to start reading was the book that left me feeling the most embarrassed.

Aaaaand we had a winner.

(I’ve been busy! So very busy! Reading dozens, maybe even hundreds of other books! I really would have rather been reading LAST YEAR’S Sarah Dessen! But I wasn’t! Aghhhhhh I don’t want to talk about it any more.)

Another Brooklyn by Jacqueline Woodson

Here’s a juicy galley that’s been sitting on my to-read stack long enough that it doesn’t feel quite as juicy anymore. It’s almost out for real! What good is a galley if you don’t read it WELL before the world can? Well, I have until August to enjoy the juice.

Gah, we are getting reaaaal close to the end of this post, if you couldn’t tell. I think I need a nap.

LAST BUT CERTAINLY NOT LEAST, the lowest of lowballs but also the best summer reading book of all time that I have read a bazillion times (but not since 2014…), the stunning, modern classic that will have you blasting Abba all summer long…

Alright, my child’s time in this ergonomic baby carrier has drawn to a close. That is code for “my child has suddenly begun screaming at a disturbingly high pitch.” Good luck and good night, summer readers. See you on the other side of the millennium.