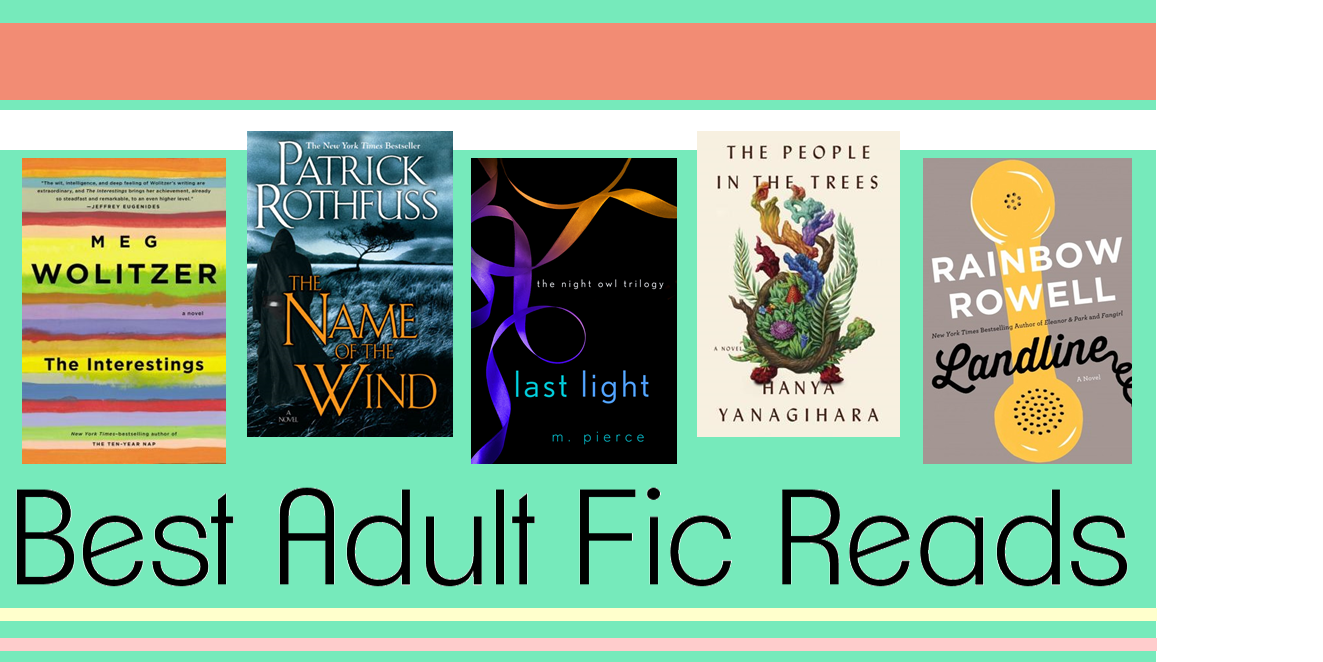 The Interestings by Meg Wolitzer

I like to consider myself a reader with broad tastes, but when it comes to choosing my Very Favorites there are a few types of books that always bubble to the top. I like big, fat family dramas. I like stories that follow children or teen characters on into their adulthood. I like stories where young people meet each other in isolated settings, forge quick and complicated social bonds, and then grow up together. I like stories that narrow in on the lives of women younger than 40. The Interestings does all this… AND it’s a summer camp story. Swoon.

But at the end of the day, this is a Big Fat Family Drama – so big and fat and dense that it took me a few check outs to actually read the thing. And it wasn’t a particularly easy task! Jules’s story wasn’t

The Interestings is certainly a Big Fat Book rife with family drama – so big and fat and dense on the page that it took me a few check outs to get around to reading it. And it wasn’t a particularly quick read, either; I didn’t fall into the story as much as slide. I ingratiated myself into the pack of characters Wolitzer introduces, all young men and women who met at an artsy summer camp as children. I didn’t find many of the characters charming or charismatic or anything like friends I would choose for myself, but Wolitzer writes their lives in such a way that I was very… ah… interested in where they would end up. Beyond the pleasure of exploring their idiosyncratic relationships, The Interestings also provides an exploration of what it means to be an artist. I found the whole book quite thought-provoking and engaging, and will likely re-read it someday.

The Name of the Wind by Patrick Rothfuss

Speaking of dense, gigantic books, here is a book so large that I did not even try to bring it onto public transportation! After the Game of Thrones binge that was 2013, I decided to lay off Westeros a bit this year, maybe branch out, try another brand of epic fantasy for a minute. Recommendations led me to Patrick Rothfuss’s Kingkiller Chronicle, which I nobly added to my Summer Reading List and read for pretty much the entire month of August. Because I couldn’t take it on the train without fear of breaking my wrists or perhaps accidentally dropping it onto someone’s head. This is a much different kind of story than Game of Thrones – smaller, more magical, and tightly focused on our fairly standard hero, Kvothe – an orphan who works his way off the streets and into a college for skilled magicians. Luckily, I found Kvothe an endearing, sympathetic guy to hang out with for half a bazillion pages, and Rothfuss’s world-building superb. (Did I just describe world-building? At all? Oh, Fantasy-hating Jessica, what has happened to you?)

So, a few months ago, I was kinda reading swamped. I can’t remember the particulars, but it’s book review season so I’m guessing I just had way too many books to read and not enough time within which to read them. Then my copy of Last Light (my October book) showed up in my mailbox. And it was shiny, with a nice soft cover, and then… well… you can see where this is going. This is the second book in at trilogy, and I read Night Owl way-back last year. I probably didn’t mention it here because it’s decidedly NOT a children’s book. In fact, it’s a bit of a dirty book. But I had to give a shout out Last Light this year because A) it seduced me into blowing off all sorts of good intentions B) when was the last time you read a bitofadirtybook and instead of skimming through the plot to get to the good stuff, you find yourself skimming the good stuff so you can get back to the plot? C) when was the last time you read a sequel that exceeded your expectations? So there you have it. Adults, if you like a good contemporary romance but you also like capable writing, surprising characters, and maybe even a little metafictive narrative playfulness, then this is the series for you! Last installment will be released in March!

The People in the Trees by Hanya Yanagihara

Yesterday, while reading this lengthy article about the real-life inspiration behind Nabokov’s Lolita, I thought a bit about Humbert Humbert and his enduring grip on generations of readers. I read Lolita after college – I picked it up because I’d heard it was a classic but was also somewhat salacious. Also, my younger sister had a copy, and I saw it laying about the house from time to time. It was a ubiquitous kind of book, with characters that have stayed with me – especially Humbert Humbert. What a character. And then I thought about The People in the Trees, because I’m not sure there are many other characters in literature that can come closer to a Humbert Humbert than Yanagihara’s Norton Perina. Perina begins as a medical student who tagging along with an anthropologist on a trip to a remote island in Micronesia. His encounters with the natives lead his career back and back again to the island of Ivu’ivu, where some inhabitants may have found the secret to eternal life. Perina is self-obsessed. He’s callous. He’s a little power-hungry. He’s a doctor, devoted to science. He’s a benefactor to the islanders that he studies.

And boy, he’s slimy. Dripping in it. Yanagihara crafts a fascinating story – which, like Lolita, is based in reality – about the gray areas of science and ethics in the mid-twentieth century, and sticks a weird, complex, shifty man right smack in the middle. Not for the faint of heart, that’s for sure, but this book was riveting and horrifying and not one I will soon forget.

It wouldn’t be an end of the year list without a Rainbow Rowell title, eh? I debated about including this one. Like Attachments, this is another romance for adults, but this time its a romance about married people. Georgie is a hardworking TV writer. Her husband stays home with their two daughters and runs the household. They suffer under the pressures of modern coupledom (and just regular coupledom). Georgie finds a phone that lets her talk to her husband when they were first dating, which leads her to relive a lot of their early relationship.

This didn’t blow the rest of Rowell’s oeuvre out of the water or anything. I appreciated reading a romance starring married folks – Rowell is quite skilled at finding new angles from which to look at familiar stories – but nothing really stuck out at me as super-exemplary, especially looking back months later.

And then I remembered the ending, so I had to be the 900th person to recommend this book. The ending. Oh. Objectively, it’s probably not that good of an ending. I have no idea. All I know is that Rowell has yet again grabbed bits of my psyche and whipping them into story form. The ending made me realize that I’d just read a book about every biggest relationship problem that I’ve ever had, and that this ending – Georgie’s ending – was always what I’ve deeply dreamed of, in every relationship I’ve ever been in.

Up next… Real-life books for grown-ups!