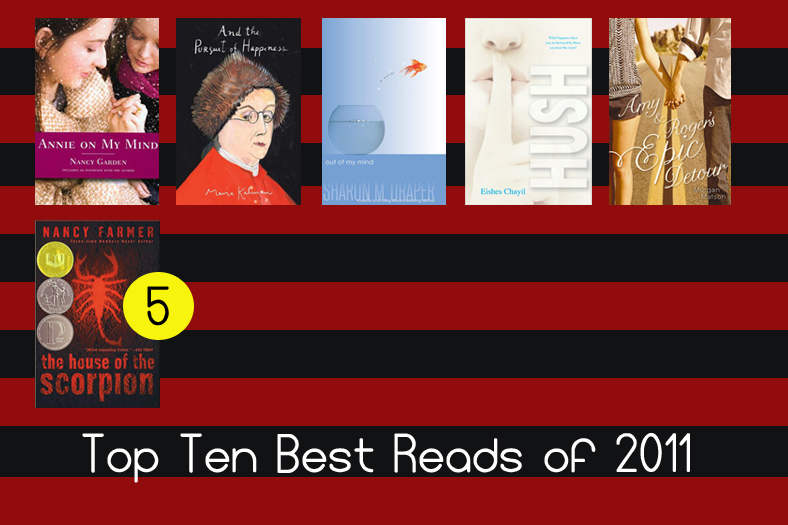 #5 The House of the Scorpion by Nancy Farmer

This book first caught my eye when I was working at a public library, spending many hours digging through the YA collection in an attempt to weed out enough books to counteract the books coming in. (This was a largely futile endeavor, by the way). I worked very hard to ignore my own biases when weeding – I once tried to weed the entire Chronicles of Prydain series only to find out that oh, they are somewhat historically important despite possessing tacky covers and only being checked out once in three years. But that doesn’t mean I didn’t acknowledge and remember my own biases.

I do remember spotting The House of the Scorpion on the shelf. I do remember its circs weren’t great. I do remember looking at the cover and thinking “Oh, my. That looks like a book I would never like.”

I also remember thinking. “Oh, MY, look at all those MEDALS!”

I’m still not sure how one book can be shortlisted for the Newbery AND the Printz. But moving on, I did finally read this heavily-medaled text and found my initial reactions to be incorrect. The House of the Scorpion is not the kind of book I would never like; it’s the kind of book that I do like.

And it’s probably the kind of book you like, too. This is a dystopia from before dystopias ran rampant – not a cutesy romance with a futuristic cover-plot, but a complex, painful, dark version of the future. Matteo Alacrán begins his life in a way that reminded me distinctly of the first few chapters of Room – I haven’t read the rest of the book, so maybe this is a terrible association, but the trappings of Matteo’s young life is really quite similar: a small apartment, a single female caretaker, a predictable daily routine, and he never goes outside. But when two children appear at his window,  Matteo realizes there is a greater world outside… and once Matteo himself ventures out there, he realizes that in this greater world, he is not just a bright young boy, but somewhere in between an heir to the opium fortune of a feudal drug lord and an inhuman monster.

So we have our dystopian hero. Check. Now we need a completely insane rendering of the near future that could very well happen at any time. Farmer’s future is a horrifying example of what happens when corporate interests and wealth take over government interests. The Alacrán family runs the world’s opium trade, their territory has become, simply, a country called Opium that lies between the US and what was once Mexico. Opium, then, serves as a barrier between the two countries – both of which are fairly third-world and destitute – and among other heinous deeds, the Alacrán estate has the freedom to grab at any illegal immigrants who enter the borders. The Alacráns themselves, however, live in a complete oasis – a compound of mansions with fountains, pools, delicious food, hired help, and air conditioning. The 1%, in the middle of the desert, and Matteo and the other children have little idea of what kind of corruption and violence occurs outside the walls of their compound.

I feel like I have ceased making sense, but please believe me (and the bevy of medals on the cover) when I insist that this is a complex, engaging, rewarding read. Think The Giver, think Hunger Games… and I don’t mean that in a “these are dystopias, so you will like this other dystopia.” I mean that the intensity/readability of  The House of the Scorpion will remind you of why you started liking the genre in the first place.