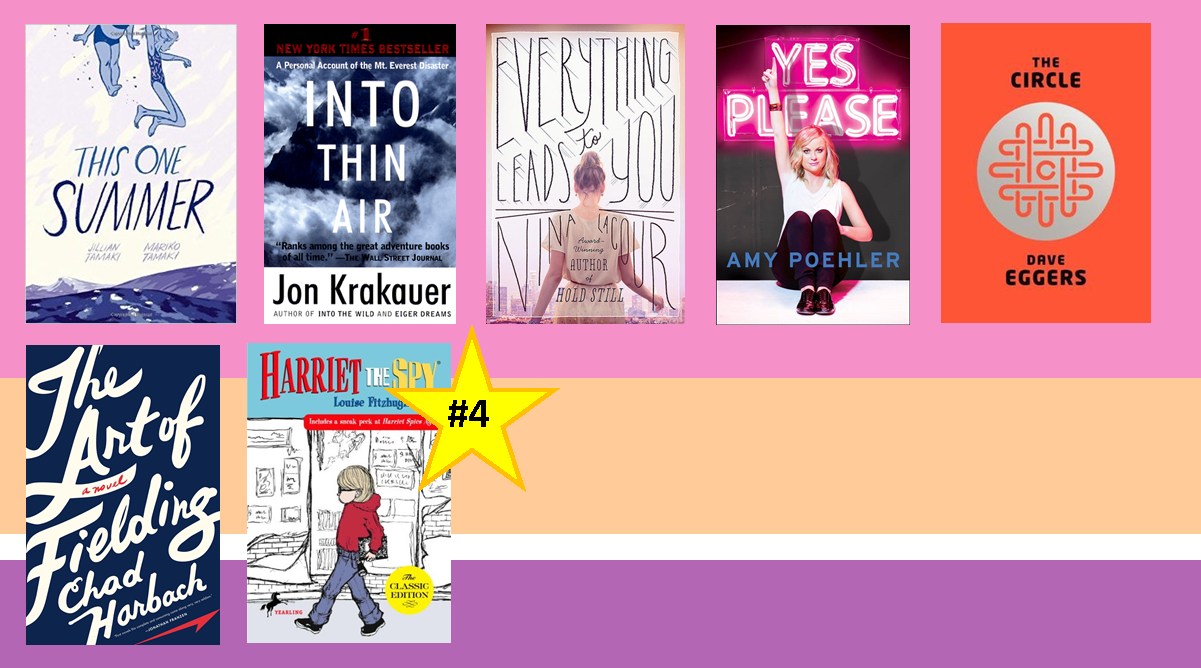 #4 Harriet the Spy by Louise Fitzhugh

Allow me to direct your attention back to a Best Reads post I wrote way back in 2011 about a little book called Charlotte’s Web. I’m not quite as anti-Western Canon as I used to be in my younger years, probably because A) I’ve liked a lot of the so called “classics” that I read in this latter portion of my life and B) I don’t actually have to read any classics anymore. I am free to design my reading life around my own priorities (which, actually, is probably why I balked at so many reading assignments in my lifetime), so when you read 100 contemporary YA and middle grade novels in a year, a handful of classics doesn’t feel so bad. Also, I can handpick whichever classics suit my fancy! It’s a win-win-win. Life after a few English degrees can be grand.

Anyway. I’m talking about Harriet M. Welsch today. Harriet the m-f-ing spy. She is just such a very, very awesome character – completely individual, independent, and somewhat irascible. She’s a free-wheeling city kid who gets to walk around Manhattan so unsupervised that she manages to spend a significant amount of time hanging out in her neighbor’s dumbwaiter. So awesome.

Since this is my Best Reads list, I am free to talk about how Adult Jessica read this particular work of children’s literature rather than think about any potential child readers. I say this because I am pretty sure I read this book as a child, and unlike many other books I read before my 12th birthday it seemed to have come into my head and left promptly – it left no impression. I’m guessing that I found Harriet a little too aggressive for my liking – back then, I was all about Alice and Margaret – the awkward heroines, the shy ones, the girls as prone to embarrassment as I was. Not to besmirch Alice or Margaret in the least, but I’m pretty sure Harriet would have had some nasty things to say about them in her notebook.

Now, Adult Jessica sees just how uniquely independent, richly developed, and kind of subversive Harriet’s character is. I can also see just how ingeniously Fitzhugh marries this maturity with a sense of conflict in a child’s life. Harriet can get herself into and out of trouble, she can traipse around city streets alone, and she’s smarter than nearly everyone she knows, but at the same time she just can’t handle the idea of change in her life in the way that most 11-year-olds can’t. Like Eleven-year-old Jessica couldn’t. It melted my sappy, grown-up heart a little. I said this yesterday, but I sure am glad books don’t expire, and that great children’s books in particular seem to endure long beyond the average publishing lifespan. I’m glad that they are still around for their intended audience, but for us sappy grown-ups too.