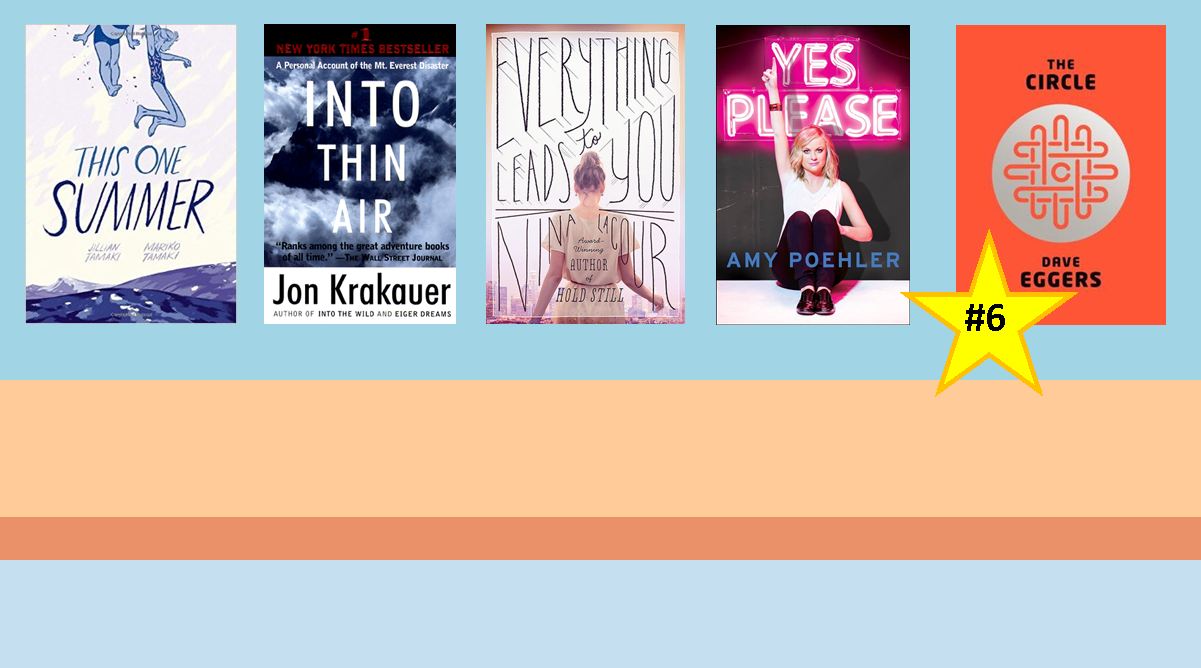 #6. The Circle by Dave Eggers

Longtime readers might recall my fraught relationship with the almighty Dystopia. I used to be in love, I did indeed.  But after the arrival of The Hunger Games,  the world caught onto my secret joy and turned the humble dystopian sub-genre into a sea of romantic trilogies. And that, my friends, is what I don’t like. Romantic trilogies.
~
Dystopias are actually okay. Sometimes. Consider Dave Eggers’s The Circle to be one of the good ones. It’s not really even a dystopia, necessarily – more like a prelude to a dystopia. Maybe that’s what I’m into these days – speculative fiction that touches on the same ideological issues as the average dystopia. In The Circle, protagonist Mae is a recent college grad tired of being underemployed and ready to start a career. A friend has the hook-up at a big tech company, and Mae starts her first Big Kid job at The Circle – picture Google and Facebook united in an unholy merger. From the first day, Mae is swept up by the cushy job perks and the competitive incentives at The Circle, even while she watches her company make a number of business moves that are… ahh… really creepy. As Mae rises the ranks at The Circle, the more she has invested in the company’s future – even if what her company does is starting to seem completely abhorrent?
~
Although this book is full of huge, allegorical plot developments and deliberately provocative ideas, Mae’s precarious moral position is the true focal point here. Once The Circle starts to make her uncomfortable, will she quit? Or stick around? This is a familiar dystopian dilemma, but after reading dozens of other dystopias, I am used to this being an easy question to answer. Of *course* the heroine will realize how damaging, unfair, and predatory her society is, and then she’ll start to fight back and the real story will begin. That’s just how these stories go. But Eggers writes Mae’s character in such a way that I really did not even know what Mae was going choose because I really didn’t know that much about Mae at all. Even though I was reading a story from her point of view. At some points in the story, Mae’s character seems flat, nearly a caricature, but then there’s a scene where you start to see the edges of her character developing – maybe it’s a ill-advised romantic tryst with a guy at work, or during a conversation with her lurking ex-boyfriend – and even if you don’t know that much more about Mae, well, you *want* to know more about her. It’s a big tease, yes, but in the best way. I was completely sucked in.
~
Reading The Circle left me delighted and intrigued, and then horrified for feeling delighted and intrigued. I loved reading a story that had interesting characters to draw me into the story, but wasn’t necessarily about the character. Mae’s not a hero, she doesn’t acquire some life skills that allow her to overthrow The evil Circle once and for all. Her story is more organic and more surprising, and puts an emphasis on the structure she’s overthrowing rather than her own moral character. It reminded me of reading Brave New World, or Feed. I know there are an infinite number of romantic dystopian trilogies out there to read, but really, I think I’m good. There are other breeds of speculative societal disaster fiction out there, and for those? I still feel that spark.
~