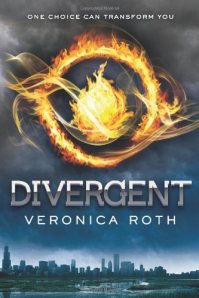 Once upon a time, I used to love dystopian fiction. But ever since The Hunger Games rolled into town, I haven’t been able to stomach many of them. THERE’S JUST TOO MANY! And, like the first bandwagon ever to be jumped upon, the longer the dystopian trend rolls on, the more really bad dystopias are allowed into existence. I have no desire to sift through the detritus when I’ve already read plenty that I’ve loved.

That is a bad reading attitude, but there it is. However, my syllabus occasionally beckons me back to dystopia-land. This semester, I read Divergent by Veronica Roth, which I’ve surmised is quite popular. I expected to run screaming from yet another plucky, anti-establishment teenaged protagonist, yet another set of fascist adults running the gov’ment, yet another allegory about global warming and overconsumption.

However, Divergent wasn’t all that bad. Things I liked:

The future in Divergent is based on a restructuring of society based on personality traits and deep belief in the benefits of certain behaviors. Inhabitants of this post-disaster-y future Chicago live in five factions. Those who live in Candor value honesty and clear motives. Members of the Erudite faction believe that knowledge is the most important asset and focus their lives on acquiring more. Amity is for the peaceful and kind, Dauntless for the brave, Abnegation for the eternally selfless. The factions keep separate living quarters but join together to go to school, run the government, and other daily-living type situations.

With all these strange societal divisions, the reader is left asking “Uh…. why?” And instead of over-explaining the entire history between our present and this future, Roth does a good job of letting the narrative unroll the details little by little. But more importantly, I liked how the theory behind these societal divisions naturally led the reader to reflect on how and why the changes occurred. Were the factions formed to promote each value within society – to enforce the importance of honesty, knowledge, courage, etc? Were the factions formed to ensure a balanced society, where at the very least five different worldviews are incorporated in decision-making? Or were the factions formed in opposition to each other – is one seeking to win out over the others? All of these questions are hinted at but never answered, which I think is a hallmark of a Good Dsytopia.

It wasn’t boring. Roth understands all that plot nonsense that keeps you flipping pages.

I don’t want to spoil anything, but the ending is a bit “AND THEN ALL HELL BROKE LOOSE!” Things get suddenly out of control, violent, and mayhem-y. I didn’t feel prepared for this turn of events, and it seemed a little like a ploy to get you intrigued because….

I almost don’t want to read the sequels out of spite.

This has got me all riled up on the topic of dystopias. I used  to have so much love, I really did. But in my YA lit library class, we are constantly talking about Trends That Teens Like, and by golly those teens like dystopias. I have even been working on a little Pinterest board that features Dystopias with Male Protagonists (any suggestions?). I think I will have to write again on this topic again soon, but for now, I will return to Not Reading Them.

(Unless they are written by Megan McCafferty)