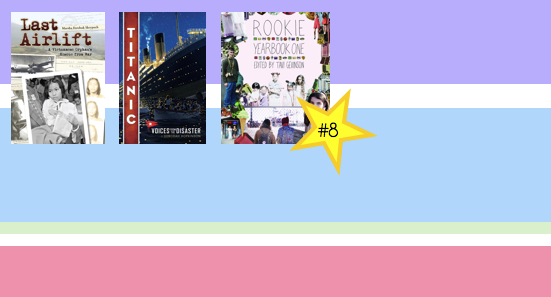 Look, guys. I am not cool enough to be into fashion, wear clothes that are not from American Eagle, or even watch Project Runway. I can’t even watch What Not to Wear, really.  I remember when the Internet was abuzz with “Oooh, Tavi Gevinson, 13-year-old fashion blogger who everyone mysteriously thinks is legit!” If it had been any type of blogger other than fashion, I would have have been all over it. But no, not cool enough for normal fashion, much less high fashion. Not interested.

Then, I started using tumblr (it’s okay, don’t worry, I don’t any more, really) and the twisted web of blogging and reblogging, I was led to rookiemag – the visuals, interviews with celebrities I actually care about, and topics of articles caught my eye. When I was taking my Young Adult Fiction class this past Spring, and I spent a lot of time thinking about websites and alternative print sources that teens would be into, that I would be into as a teen, Rookie Mag was on my mind.

It took me many months to realize that it was Tavi Gevinson, magical child blogger, who was behind the reigns. And until I read this article in the Washington Post about her (non-creepy) mentoring relationship with Ira Glass did I think about what an accomplishment this whole Rookie non-franchise is.

Rookie Yearbook One is a print collection of Rookie’s first year as an online magazine for teen girls. It’s impressively large –  a fun book to hold in your lap and to flip through like a magazine, but it’s still THICK with writing. Not necessarily meant for the read-straight-through – I wanted to, but my mind and then my arms would get a bit tired.

The types of articles are various, but in a magazine-like fashion, stick to a few formats and topics – interviews with off-beat celebrities, advice for social situations and coping, tributes to people and things the editors love, autobiographical guest articles about anything teen. Love, sex, boys, make up, fashion, things that are pink – all of these are present and accounted for.

But I can’t express to you enough how far, far away Rookie is from mainstream teen journalism. It is obvious that Ms. Gevinson has absorbed a bit of the 1990s zine culture here – the layouts, the fonts, the art feels homemade, like it is trying to be homemade. The Rookie team also has its own little landscape of pop culture influence that they have adopted as patron saints – movies, television shows, books, musicians, actors standing in for the broader swath of celebrity represented in traditional teen rags… pop culture that I relate to more than what is presented to me in Cosmopolitan… which could be why I find Rookie personally satisfying.

But beyond my own interests, by creating a little well-designed, curated sub-culture in Rookie, Gevinson and pals are speaking to teen girls in a way that the media doesn’t often speak to them: honestly, with a surprising amount of levity, and without the kind of corporate, stereotypical assumptions about teen girls and what they are into. No “Fifty Ways To Get a Guy to Notice You” articles, but maybe one about “How to Actually Speak to The Person You Are Romantically Interested in.”

Or an article about what kinds of food to eat in the middle of the night when you are hungry.

Or a five page essay on why Joni Mitchell is amazing.

Basically, I love Rookie as a theoretical piece of media, and also loved reading it, even though I am neither a teenager nor cool enough. Whatever.