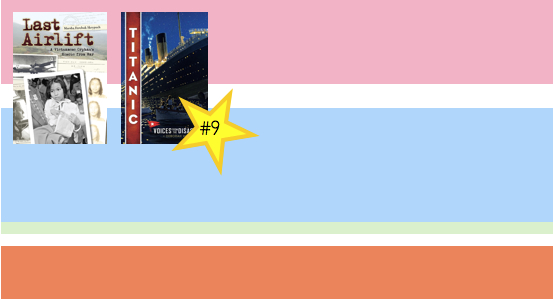 #9: Titanic: Voices from the Disaster by Deborah Hopkinson

Not to pat myself too hard on the back, but this year, I’ve been a pretty good little blogger. I’ve posted regularly and written about a great many books that I’ve read. But now I am faced with the dilemma of loving books that I’ve already reviewed, extensively. Is it journalistically appropriate to re-post reviews? Should I think of some more blather to add to a previous review? Never mind the fact that I probably found the impetus to write so much as I was doing last year’s awards, wishing that I’d had already written up some reviews instead of waiting until the end of the year.

But no more hemming and hawing – too much hemming and hawing does not a good little blogger make. What follows is my original review. I read it in June; six months later, I still remember how easy this book was to read, and how well it was designed and organized. I don’t remember all of the stories and information Hopkinson crams into such a small book, but maybe that means it’s time for a re-read?

I feel like the Titanic is a good example of how this can backfire. The sinking of a giant, luxury ocean-liner is so compelling that almost any article/book/play/movie is going to illicit some kind of emotional tug… but after so many years, I think the vast majority of Titanic literature – especially for kids – is probably relying on the content to carry a lackluster literary execution.

One of the many books published in honor of the 100th anniversary of the ship’s sinking, Deborah Hopkinson’s Titanic: Voices from the Disaster, I think, is a rare success at both. As a non-fiction text for kids, the information is accessible and understandable, the narrative engaging, and the scope neither too broad or too narrow for the audience. (Can you tell I just took a course on nonfiction for kids? Oy vey…)

And just because it is a nonfiction book for kids doesn’t mean that Hopkinson’s treatment of this tragedy glosses over any of the rougher details. No, there is no gore, no descriptions of people sliding down the decks to their doom, but there is all sorts of heaping pain, here. Hopkinson really digs into that pain – exploring the experiences of all sorts of Titanic travelers. And more than that, Hopkinson calls attention to the questions of responsibility here that I think is unique for a book with a young audience. When a tragedy like this occurs, who is to blame? The very experienced captain who pushed the boat to higher speeds than was perhaps prudent? The nearby boat that heard Titanic’s calls for help but did not come to assist? The boat designer for creating a floating death trap, basing many assumptions on “best case” disaster scenarios rather than worse? The lack of safety regulations and practices? There are no right answers – Hopkinson lays out the facts plainly, without bias – but asks the young reader to think critically about these questions themselves. And maybe it doesn’t matter, maybe it’s a question of fate. The overwhelming tragedy is present here, too, invoking both the drama of the story as well as the emotional arc.

I was in seventh grade when the Titanic movie was released – prime age for weeping in the theater over a frozen Leonardo DiCaprio. I still love the movie, but after reading Titanic: Voices from the Disaster, I’m finding the actual events more fascinating than a Hollywood-style, fabricated love story. And with Hopkinson’s wealth of interviews, archival material, and photographs, this book feels almost as alive as a film.