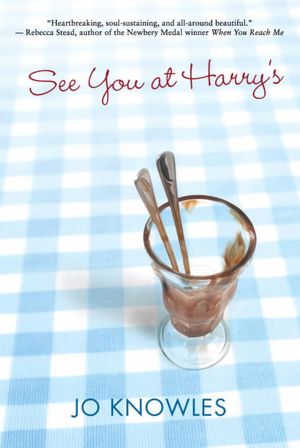 Let’s talk briefly about the Problem Novel. Although I’m sure there are a few good articles and books to be read about this modern YA phenomenon, my understanding and use of the term refers to a type of novel where The Problem dominates the reading experience –  all other elements of story – plot, setting, character development become secondary. Sometimes, writing a Problem Novel means the writer gets away with slopping up the writing, filling a book with lousy, one-dimensional characters, or other crimes against literature. Sometimes, a Problem Novel is a well-written, complex piece of literature that just happens to be about Teens with Problems.

Jo Knowles’s See You At Harry’s criss-crosses the line between Problem Novel and Regular Novel with alarming rapidity for a book that is, otherwise, a quiet family story that falls in the late middle-grade, early YA territory. Fern is a middle child among four literarily-named, problem-prone siblings: Sara didn’t get into any good colleges, so she’s stuck at home working for the family restaurant, Holden is keeping a major league secret from his family and everyone he knows, and Charlie is a four-year-old, so he’s a handful. To sensitive Fern, her parents’ marriage seems strained, and the realities of running a family-owned ice cream shop put a strain on everyone.

There’s a lot of angst going on here, and Holden’s secret is certainly a capital-P Problem, but the combination of personalities and strong characterization emphasizes the family dynamic and the intricacies of each relationship, rather than focusing on the “issues.”

And then, Knowles throws in a sucker punch of a PROBLEM, for the whole family. By this point in the novel, I was so endeared by the characters, it didn’t feel like PROBLEM, it felt like a painful but complex family issue. That happens to far too many families.

And also, I was so endeared by the characters that I read the last half of the novel with pages flipping – I was alone with the boy, driving home to Michigan. It was getting late, and I read and read, finishing the last few pages with just barely enough daylight to light the page. Since then, I’ve run into two friends who uttered the phrase “Did you read See You At Harry’s?” in the just same tone that I knew immediately they had gone through the same emotional rollercoaster I did.

So there you have it – a not-so-Problematic Problem Novel that will make you weep. Well done, Jo.