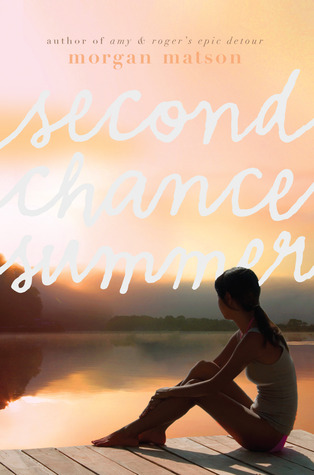 Can a book fall short of your expectations but also completely satisfy? I think I have a tendency to love or loathe books (and I don’t read a lot of books I loathe, so mostly, I collect books I love), but I think there is a lot more gray than I’d often like to admit.

I loved Morgan Matson’s first book, Amy & Roger’s Epic Detour, so her second book, Second Chance Summer, has been on my radar for months. When a shiny hardback crossed my path, I practically salivated.

I did enjoy this story – a summer in the life of a girl returning to her lake house with her family after a long hiatus. She left behind some messy romance and friendship situations, and of course they all are waiting for her when she returns – everyone has grown up a bit but nobody has forgotten Taylor’s crimes. Her family is a fun bunch of characters; moody but shy ballerina sister, nerdy fact-spouting brother, a stray dog that is adopted into the fold reluctantly. A romance.

Definitely a book for summer, atmospheric for sure, but not quite atmospheric enough to hide some overexplaining, some undeveloped character traits, some shaky plot bits. I felt like Taylor was trying too hard to be elusive and troubled, creating drama for herself where it would be easier just not to stress. All of her misdeeds occurred at age twelve – at fifteen, all the affected parties acted as if they had been stewing over terrible betrayals for the entire three years of Taylor’s absence. And Taylor’s love interest – literally, the boy next door – has an annoying habit of magically appearing – poof! – every other paragraph or so, popping out from behind counters, lurking in the woods with benign intent… Matson plays off Henry’s Houdini-act as a metaphor at some point along the way, but it was just WAY too convenient to escape my notice.

But despite any surface misgivings, I found this book to slowly move me. Emotionally penetrating. As I read, I found myself shutting the book and putting it aside, reading anything else instead – not because I couldn’t bear to see Henry pull up to the dock with his rowboat at yet another well-timed interval – but because I knew this book was going to hit me hard, at any second. The reason Taylor and her family have returned to the lake house is because her father has been diagnosed with pancreatic cancer. He has three months to live, and he wants to spend it with his family at his favorite place in the world.

I wept. I wept on the bus, without apology. When it was my stop, I folded a page, walked to my apartment and picked up where I left off, and read on, while continually crying.

Maybe I’m letting my emotions sway my opinion here, but as the tragedy unrolled, I began to forgive the sloppy bits. Wouldn’t I be sloppy and underdeveloped and quick to see meaning where there is none if I were Taylor? If I was Taylor’s mother? If I were dying? Maybe the tragedy highlights Matson’s strengths here – her characters are not flawless, not aware of their motives. They are grieving ahead of time, and Matson captures the pain, the earnestness, the guilt, and, most importantly, the care and love they have for each other.