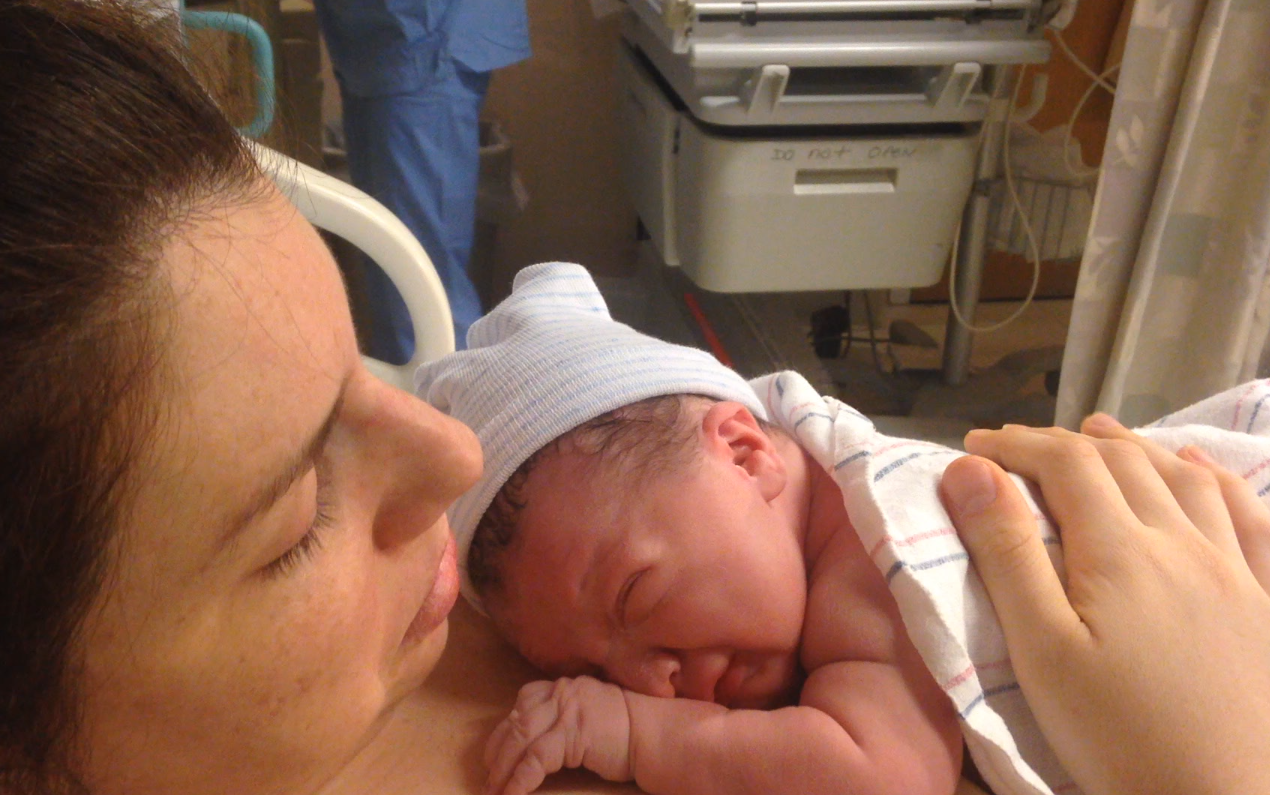 My son was born just before midnight – two full weeks early, but tipping the scales at 8 lbs, 2 oz.

This picture is a screenshot, grabbed from a short video my husband took after my baby was born. I look pretty much how I felt: completely shell-shocked, possessing only unconscious instincts – hold baby close, rub his back, don’t drop him – and more tired than I have ever been in my entire existence.

I requested delayed cord clamping, but the little guy came out too quiet. Breathing, yes, and making a slight whimper, but they called in a NICU doctor to look him over anyway. He was fine – he started crying without much drama – and they returned him to me while we all waited for the placenta. Like its in utero companion, my placenta also took its time. Wet Noodle Jessica had agreed to more Pitocin at some point during the pushing process, so they sent even more down my IV to encourage my uterus to cooperate. It didn’t work in whatever window of time they prefer, so an OB arrived. She did something acutely uncomfortable but effective. I’d rather not know exactly what went down… down there. Then, there were stitches. Nobody offered much in the way of detail, and I didn’t ask, but the process was also… unpleasant.

Here’s something they don’t tell you about that “Golden Hour” of skin-to-skin bonding with your newest newborn: when you are in a hospital, it starts at some debatable point in time while you are still getting medically worked-up. There are bustling medical professionals cleaning up your bodily fluids and looking for lost washcloths with a metal detector. You might have been awake for over 48 hours so instead of smiling and posing for photos and bonding… you just fall asleep, or fall into a similarly catatonic state.

It felt like about 2 minutes passed between the delivery and when the L&D nurse came to my side and said “Okay, let’s try nursing!” I was hoping my baby would be one of those crazy “breast-crawling” infants who could paw his way up to his first meal, but it seemed like my child was just as out of it as I was. Wet Noodle Jessica followed the nurse’s suggestions and offered him a nipple. My little sleepy guy (A baby! A boy!) latched on like a champ.

We were eventually relocated to the postpartum floor, and as soon as it was convenient, we let our new nurse push our fresh little guy’s rolling bassinet right on over to the nursery and immediately fell into the most needed sleep that any two humans have ever received. 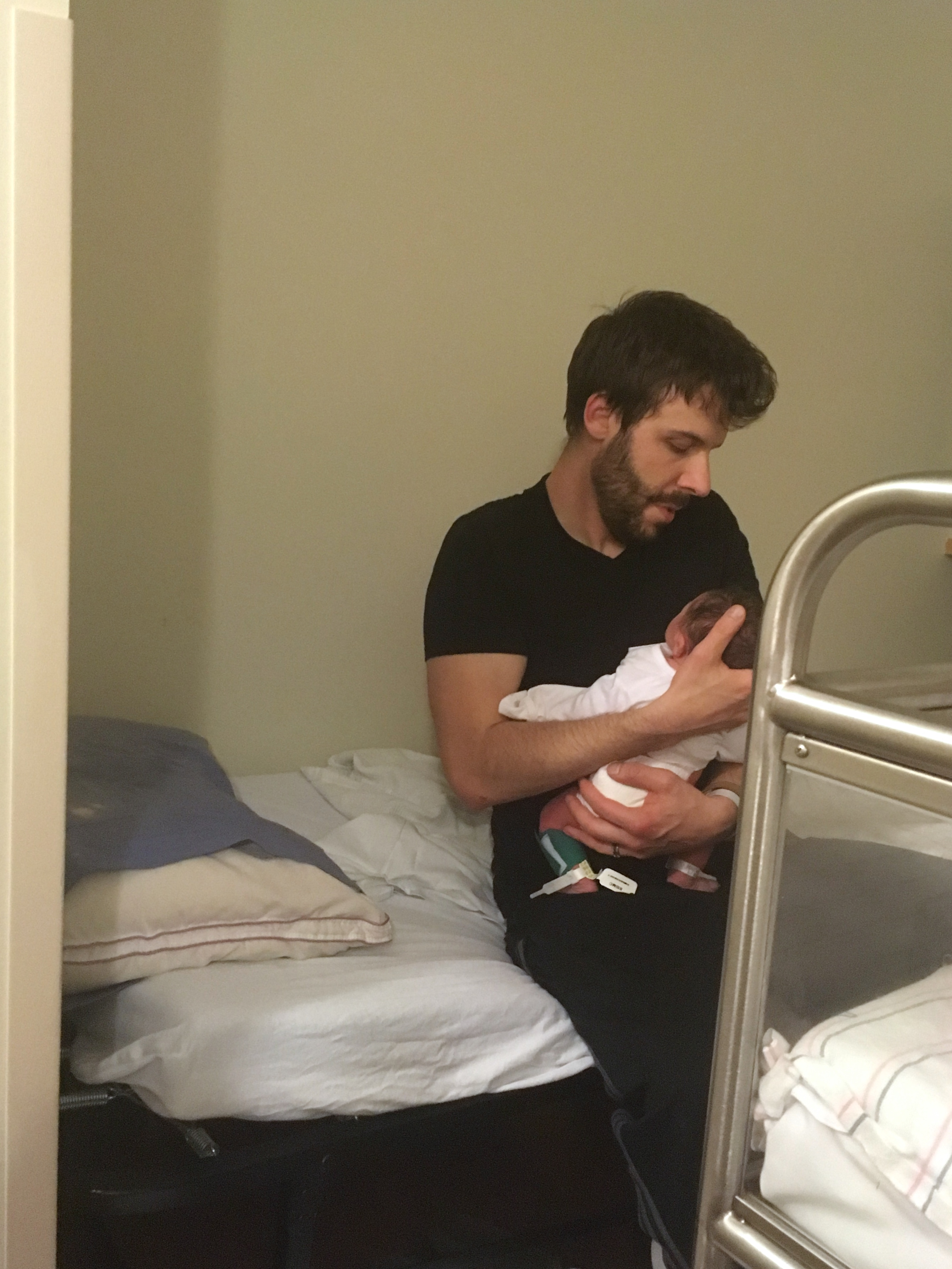 Don’t birth stories usually end about now? They certainly don’t usually stretch on for over 6,000 words. But I’m on a roll, and so many amusing things happened while we stayed at hospital!

We spent our first night and day in a lactation room. “You got the last room!” they told me, cheerily. “Everyone else is going to have to spend the night in the hallway!” I’m still not entirely sure what a lactation room at a hospital *is*, to be honest, but I will tell you what it is not: an actual, functioning hospital room. There was room for my bed and a cot for my husband, but not much else. There was a sink for hand-washing, but no soap. There was no private bathroom.

If you have given birth, you will understand how disconcerting this is. I was offered, instead, the use of the public bathroom down the hall. The bathroom used primarily by dads and visiting family members. My nurse, that first night, helped me hobble down the hallway in my gown. She toted a plastic bag filled with the myriad devices and supplies necessary for a newly postpartum mom to… well.. pee. I repeated the process on my own the next morning –  I tried to be tidy, out of courtesy for those dads and visiting families. And by “be tidy” I mean “avoid leaving bathroom looking like a crime scene.”

The first night, however, at 3 in the morning, I did not care much about my bathroom situation. I cared about food. Where was the food. Why was it not in my mouth? My husband had optimistically ordered a meal during the dinner hour and as far as I know, nobody had eaten it. Where was it?

I might have cried. I shoved more Cheez-its in my mouth – they were pretty much the only food product I’d eaten all day, but I was desperate for calories. My husband foraged a cup of ice cream and a peanut butter and jelly sandwich for me from the kitchenette – I left half the sandwich, knowing that I would wake up even hungrier than I was now.

Four hours later, I woke up in the pitch dark of our windowless lactation room. My cell phone alarm was going off. I was hot – hormones, probably, but also this room seemed to lack air conditioning?! – and still hungry and wanted my baby.

Also, the Comcast man was going to arrive at our new apartment in less than an hour to finally install our Internet.

“You need to go meet him,” I told my husband. We had been living without Internet for two weeks! Who knew how long it would take to get another appointment! “And you need to bring back bagels from the good bagel place. And bring me my baby.”

I had assumed the nurses would have woken me at some point to nurse a crying, hungry infant. However, it seemed the previous day’s events had taken just as much out of him as it had me – he hadn’t woken up once. My bleary-eyed husband wheeled the bassinet into my room and then left to get us some internet.

In between cuddling, taking exhausted-selfies, and trying futilely to order breakfast in between the seemingly endless amount of sudden visitors (Nurses! Student nurses! Breast pump guy! Photographer! More nurses!), I had to spread the good news to my family.

First I called my mother, of course.

Mom: “Congratulations! We are in upstate New York right now and we will be in Boston by noon.”

Mom: Your sister will probably beat us. Her plane should be landing any time now.

I had no idea anyone was planning on visiting us so soon. I mean, 48 hours before I had no idea I was going to be having a baby! Conveniently enough, my husband was able to meet my sister and her boyfriend (now husband!) at our apartment. And the Comcast guy. Who gave us Internet, bless the Lord.

Just a few hours after I woke up, my tiny, windowless lactation room now contained me, my husband, my baby, my mother, my father, my sister, her boyfriend, and a bag of good bagels. Then: the postpartum midwife and I think some other random medical professionals.

“Hi! Everyone is talking about you! We wanted to meet you! The woman who delivered without pain medication! And look, you’re breastfeeding! This is rare. We just don’t see this. Congratulations!”

At this point I recognized the real reason to have an unmedicated delivery: if you achieve it, some people will treat you like you are a rare, exquisite creature and shower you with empowering compliments. I honestly hope this is how all newly postpartum moms are treated, no matter what happened during their birth, because heaven knows the outcomes of a birth are about 90% out of even the most determined mother’s hands. The words of those women meant so much to me; I recalled their message many times over the next weeks, when I was exhausted and emotional and unsure of everything. Bringing a child into the world was something hard but also something worthy of praise.

“And what is your baby’s name?”

Oh yeah. Speaking of rare birthing experiences rarely seen within the walls of a hospital.. we had no name for our child. During labor and delivery this was just part of the novelty of not finding out the gender. Afterwards, it was just confusing.

What I wanted to say:

“Well, I am really picky about names and all traditionally male-gender-associated names are pretty terrible, and also I had a baby 12 hours ago and my entire family and I have been in a tiny room with no air conditioning or bathroom since I woke up from 4 hours of sleep, so I haven’t really had a moment to think about what to call this child.”

What I did say:

“No name yet! We are still deciding.”

What the delightful postpartum midwife said:

“We have got to get you and your entire extended family out of this room.” 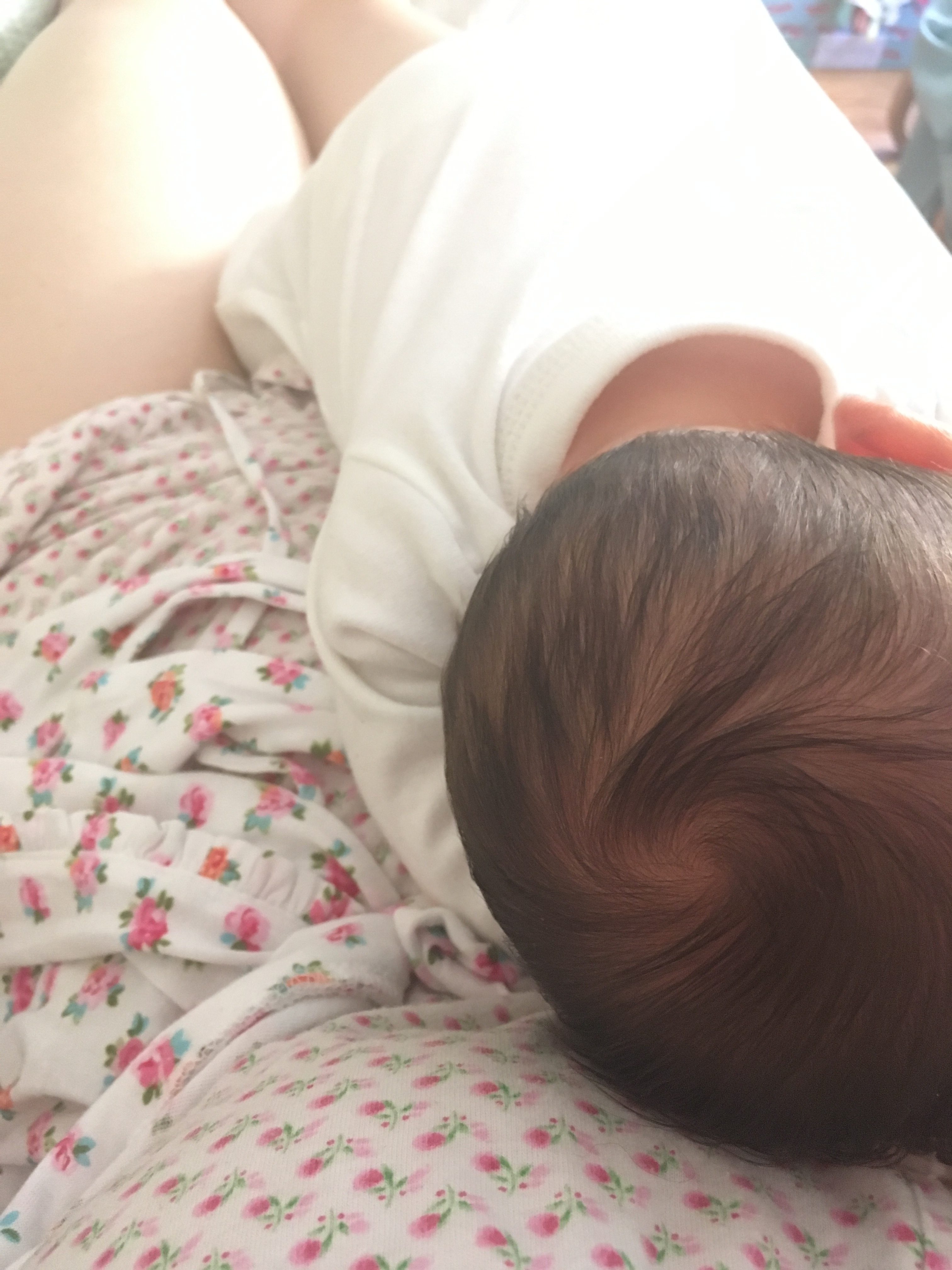 We were moved to a standard postpartum room before the day was over (“You should really call and complain about this,” the midwife said. “This is unacceptable!”) That night we roomed in together. I kept a light on – how could you possibly parent in the dark? – and set my phone alarm to go off every two hours so I could nurse. My husband stayed up finishing grad school homework – oh, did I mention my husband had started his first session of summer grad school… oh… 4 days before our child was born? My due date was his first day of on-campus orientation, but online classes started right away. Apparently part of that bagel+sister+Internet acquiring trip also involved recording himself singing? I never really caught the details, but while my mind and body were wracked with the aftermath of labor and the shocking reality of our new baby, my husband was dealing with the shocking reality of our new baby and also reading articles and commenting on Blackboard posts. How awful.

Our little guy? He slept. I woke him to eat; he ate; he slept some more. A perfect, sleepy, poorly-swaddled angel in his little rolling bassinet bed. He passed all of his newborn exams, save for a touch of jaundice. The next day, I not-so-subtly suggested my many family members treat themselves to walk into Fenway to find some lunch; with a few minutes to ourselves, finally, we gave our child a name. We had another relatively peaceful night in the hospital; the next day, we finally installed our carseat base and then carried our little boy out the door, across busy Brookline Ave, through the weird alleyway between the Winsor School and the Simmons gym where I used to run extremely tiny laps on an elevated track, and to the “secret” place where you can street park for free in Fenway.

And then, after we drove to Allston to pick up our no-longer-cracked-screen iMac (that’s another story entirely) and picked up some take out Thai, 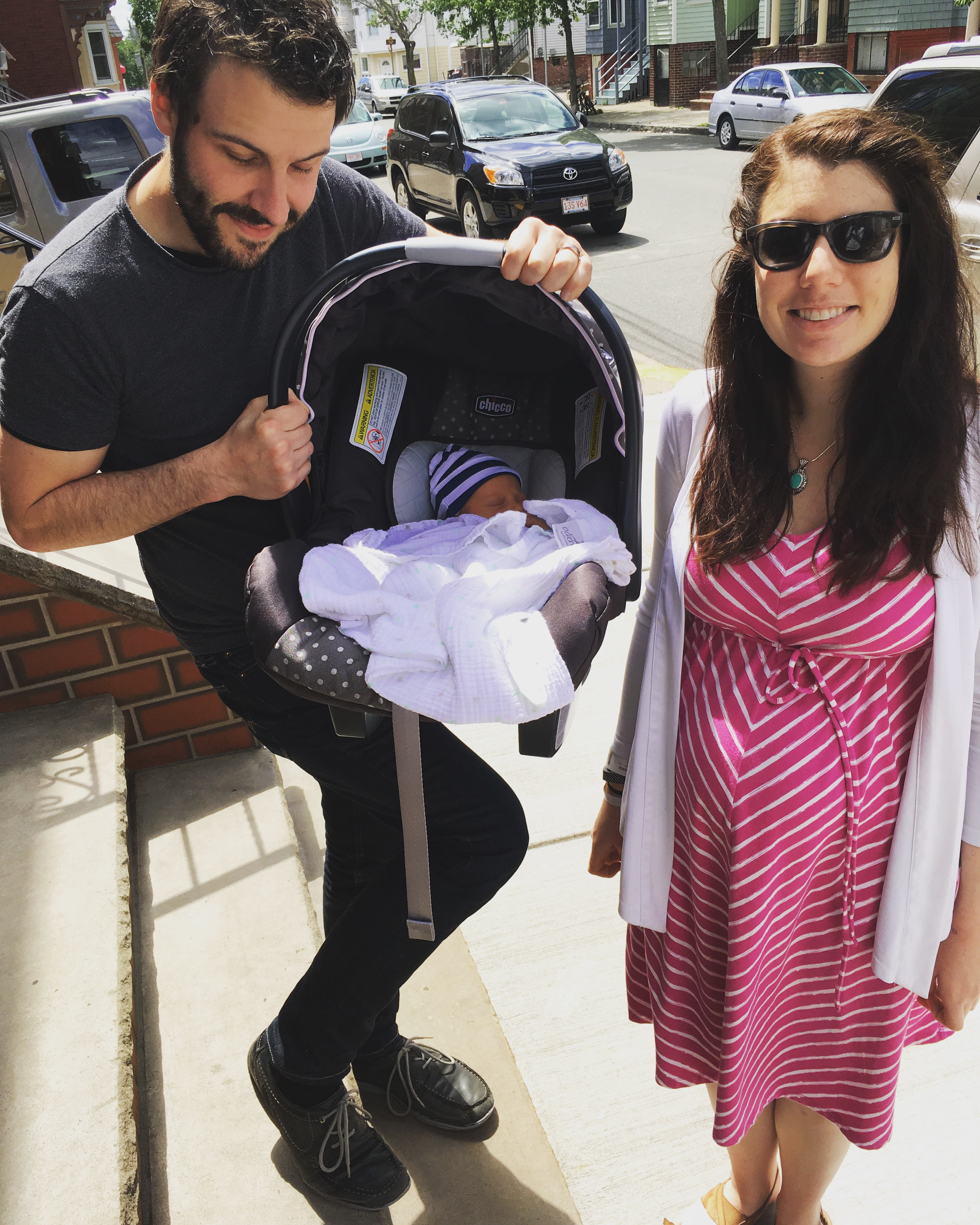 we brought him home.

Thirty-three months after that… 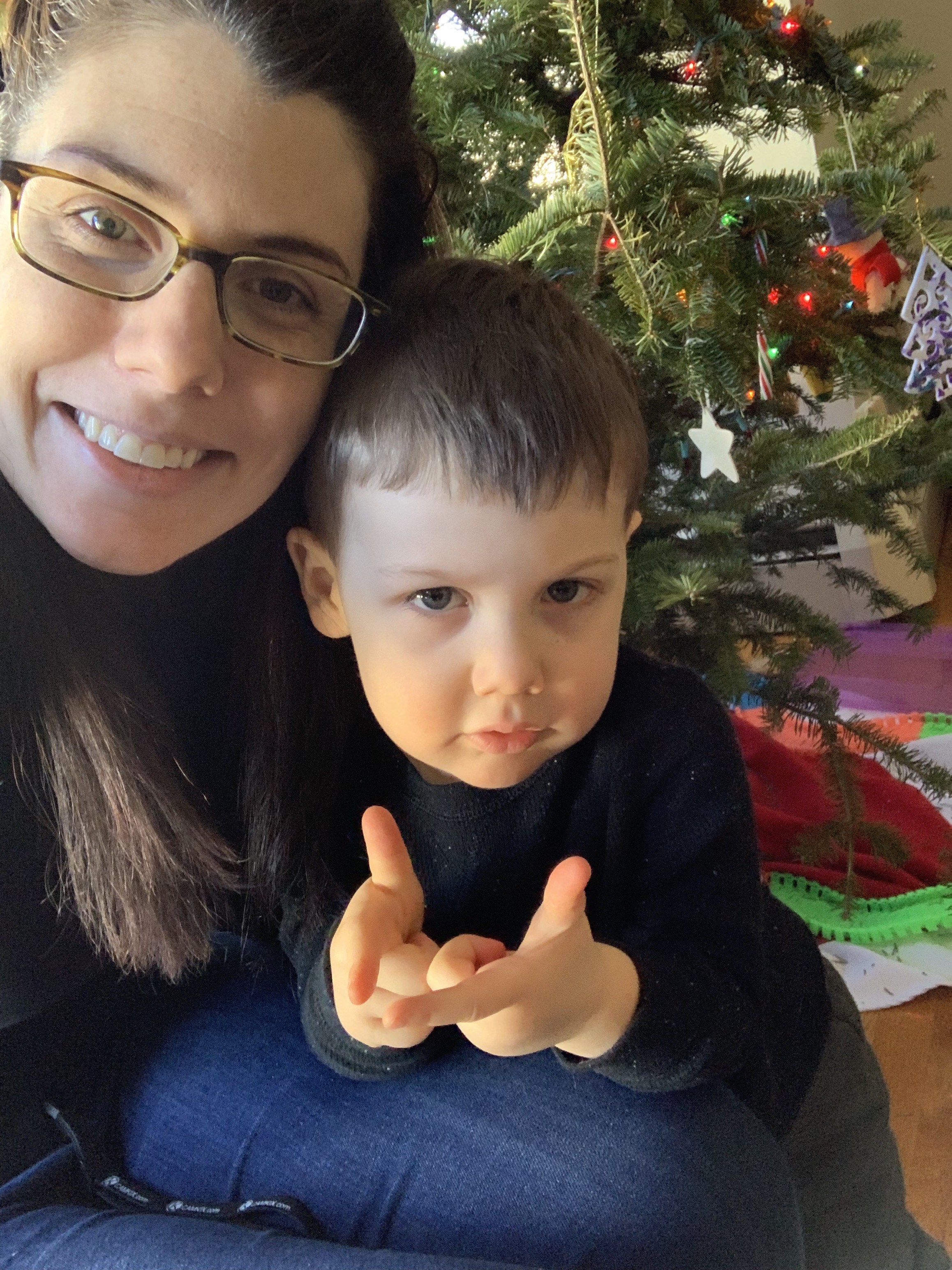