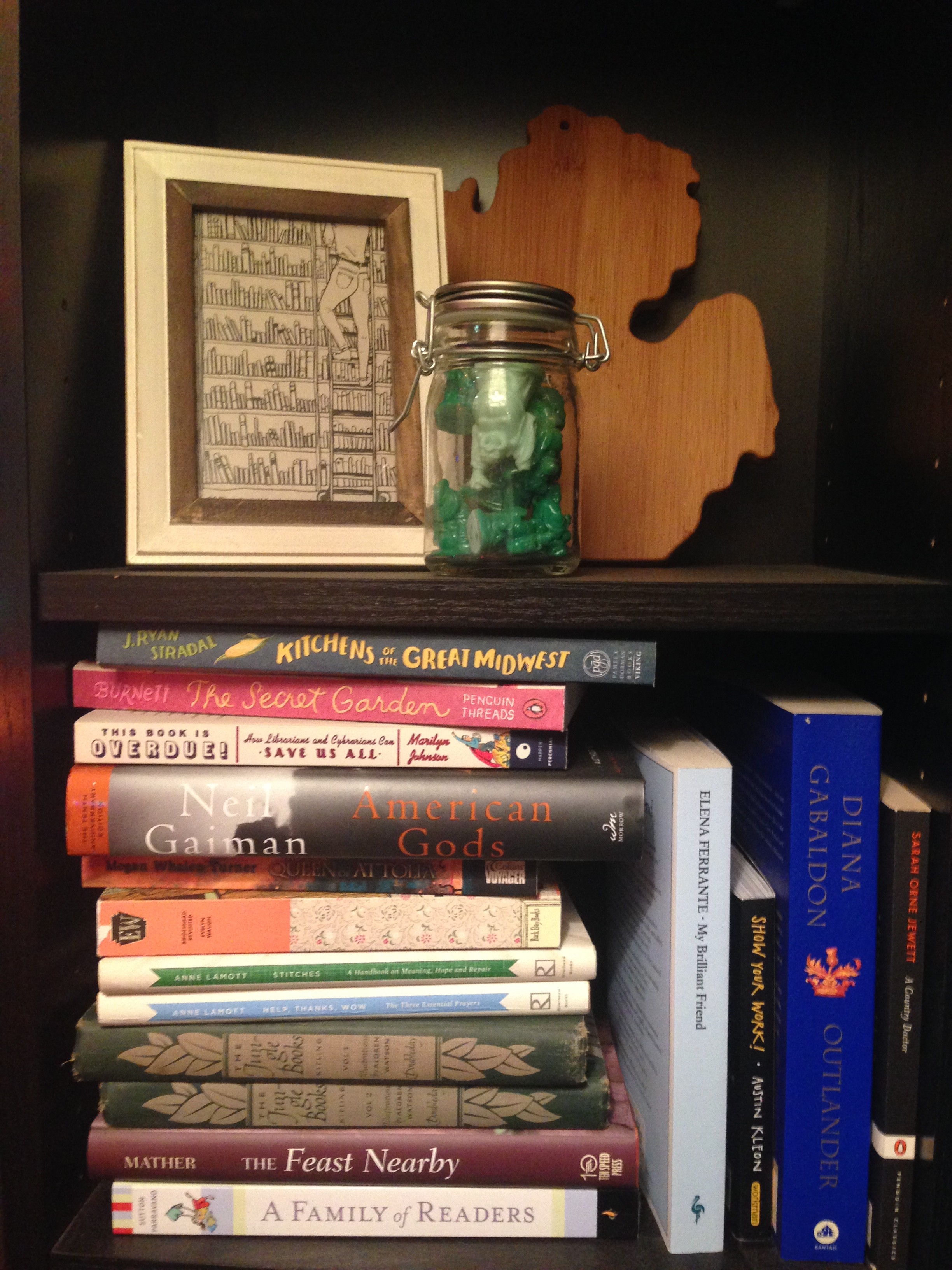 It’s December 1st today. I am taking that last calendar flip of 2015 as permission to do a little end-of-year contemplation. This year, man. This freaking year. Do I say this every year? I can’t find textual evidence at the moment, but I wouldn’t be surprised. When we moved to Boston in 2009, my life took off at a gallop. Thankfully, we’ve had a preternatural amount of good fortune during these last six years – much of what keeps my schedule packed is the Really Good Stuff – exciting career and professional activities, travel, time with friends and family, and good old-fashioned book readin’.

But busy is still busy. I’m still reasonably confident that I have enough hours in my weeks to accomplish some stuff while I’m kicking around on this good green earth… but I’m beginning to suspect that I might also spend those weeks (months, years) waiting for some mythical period of rest.

Is this just adulthood? A generational condition? Is it Boston? My genes? My life choices? An inability to say no? That pesky proclivity toward overachieving? Probably all of the above. Sometimes, my busy-bodiness irks me, especially when I find myself putting off tasks because I’m waiting to wrap up XXX or have a few spare moments to YYY; am I running myself ragged just so I have a good excuse to stay away from some of those bigger, scarier life goals? But I’m also the kind of person who enjoys a certain level of leisure in my daily life – I get up early so I can (re)-read chapters of Game of Thrones with my coffee, rarely do anything productive past 8:00 p.m., and am all too ready to trade my required reading for a fun book (orrrrr another episode of Master of None) when I’ve had a long day.

So, am I so prone to manic over-scheduling that my life needs a sea-change? Or am I better off manipulating my daily hours and habits so I can better utilize work and leisure time?

Well isn’t THAT a question?

Way back in early October, I sat down in front of an empty page of a notebook to think about what would come next. I was just finishing up my Year of Reading Madly responsibilities, with three months left to spare. What should I accomplish now?

My mind started churning through that never-ending laundry list of Things to Do Later; the habits and hobbies and tasks to attempt in the event of that Mythical Time of Rest. I’d even made a list on some restless Saturday past. But there, in that moment with my notebook, there was a little voice in my head that said “Why not do nothing?”

And I listened to it.

So no arbitrary goal setting, no trying to squeeze in “Just One More…” before the end of the year, no new habit building or NaNoWriMo or anything else remotely aspirational. Not necessarily three months of wild indulgence or sloth or apathy. Just three months of getting the stuff I need to get done and then doing whatever. Three months of regular old living.

It felt like a good choice. I imagined that in between my normal activities (working, cooking, cleaning, exercising, book reviews, etc) I’d find some downtime during which I might flex my autonomy. Follow my interests. Read the books I felt like reading. Write whatever I felt like writing. Spend some quality time with my husband. Maybe watch a little more television than usual, and do some holiday baking. Regroup in January.

Points off for continuing to set the occasional goal and schedule.

And even more points off for… being too damn busy.

So here’s what I’ve been up to.

I review books for a biannual review journal, so I’m smack dab in the middle of what I like to call Guide Season. The books are usually reasonably quick reads, the reviews brief, and I have a few years of practice now; the process isn’t overwhelming. But every four weeks – a deadline. Every four weeks – another stack of books to plow through.

I’m also preparing to participate in ALSC’s Bill Morris Book Evaluation Seminar in early January. I am really 100%, unequivocally geeked about this particular professional opportunity! We’ve got a reading list to work through before the day of discussion; thankfully, there are a lot of 2014 heavy-hitters that I’ve already read once or twice, but I’m still planning on giving each book another go around. Plus, there are articles to read, a professional book to revisit, and awards criteria to consider. Geeked, but… work.

This Fall I’ve also been doing some work for another ALSC joint – the May Hill Arbuthnot Lecture Award Committee. This year, my committee selected the speaker for the 2017 Arbuthnot Lecture – which can be given by a children’s author, illustrator, editor, scholar, or anyone else equipped to write and deliver a lecture that would mark a significant contribution to the field of children’s literature. It’s a virtual committee, so there has been plenty of research, discussion, and fighting with technology to be had. The speaker will be announced in January at Midwinter, so look out for that! Then, we will move on to taking and selecting a bid for the speech’s location.

And last but certainly not least, I’m waiting patiently for January 1st, upon which it will be time for yet another year with the Cybils YA Nonfiction Award. I have read only a scant few of this year’s nominees, so I am guaranteed at least a few books to add to my docket quite soon, along with the associated discussions.

Add in a cookie competition at work, more holiday parties than I can actually physically attend, and five nights in Michigan for New Year’s… what a great time to take a step back flex one’s autonomy!

It’s also the time of year where I typically buckle down and blog heavy for my annual end-of-year Best Reads Extravaganza.

This year, though, I am feeling conflicted. Yeah, I read a *ton* this year. 172 books completed and counting. Also, since I started my awards reading late in 2014 and wanted to avoid too much chatter about eligible titles, I set my fiscal cut-off date a little earlier than I usually do – even more books!

But it’s really been just such a strange reading year. I read so much and so fast that they are blurring together in my memory. I read some really good ones, yes, but many many many more that didn’t stand out, or that I liked but weren’t really my kind of book – books that I could gladly recommend, but few that stirred up the kind of passion that make me excited to sink time into blogging about.

The second half of the year has been even stranger. In June, I read entirely books for review. In July, more review books, plus a random assortment of other unremarkable titles – mostly adult. August was pretty good, but I only read 6 books. But in September, I only read 1! October was back to reviews; November reviews + graphic novels; December, reviews.

My busy life took over my reading life in 2015. There haven’t been too many hours in the day where I could read freely, and when those hours come, and episode of Great British Bake Off or going to bed an hour early is often more appealing. My attention span is too shot to handle dense audiobooks – podcasts and light adult nonfiction and memoirs are all I can handle.

But a year of reading critically has had an impact on what kinds of books I want to make time to read and what I think about those that I do. I feel significantly harder to please  – even if I had a magical reading holiday to tackle 10 books of my choosing, I can’t imagine that I’d feel passionate about a majority of them. Even if they were the most well-recepted, critically-amazing, just-up-my-alley kind of books. It’s harder for me to get amped up about any one particular book, but it’s even harder to decide what books to try out – to audition. I find myself wanting to wait for more and more critical input to arrive before I read something, lest I find myself wasting time.

This is something I’m hoping to work through in 2016. For now, I think I might swing back to the blog later in the month to do a Top Ten or a few fun lists. Something lower key than usual, but I can’t give up the tradition entirely after… ah… nine years? (NINE YEARS??!?)

And then… a crazy-short vacation.

And then… a crazy-crazy ALA Midwinter.