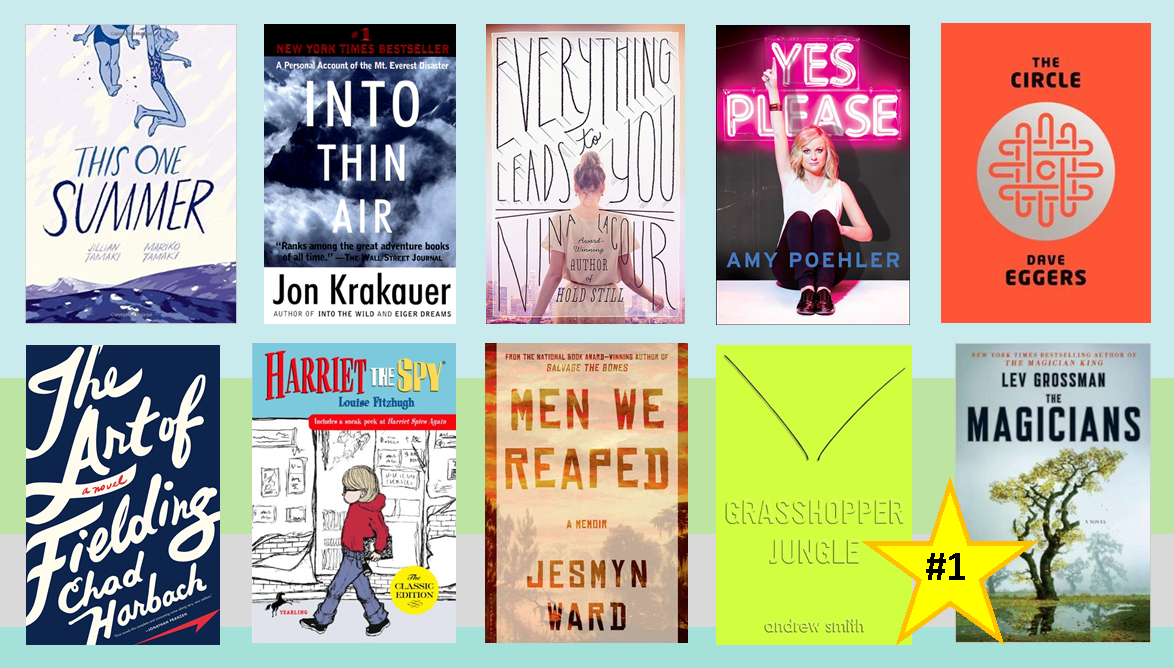 #1 The Magicians series by Lev Grossman

Oh boy. Here’s a review that has been a long time coming. Almost an entire calendar year coming!

I read Lev Grossman’s The Magicians at the tail end of December, just as I was finishing up my end-of-the-year book awards, my Cybils reading, a spate of professional reviews. I was also coming off my second listen-through of Game of Thrones, A Clash of Kings, and A Storm of Swords. This is all to say: I was busy and doing a lot of required reading…. but despite having read through the series twice in 2014, I was sorely tempted to jump right back into Westeros, just because it was a comfortable place to be.

I resisted the urge for a number of reasons – instead, I was just an angry little reading thing. Nothing seemed fun. Nothing suited. It was a very slumpy time, and while I’ve come to accept the fact that, oh, human life does not always adhere to whatever superhuman standards I set for myself, it still unsettles me, to feel so adrift. Like a habitual, every day runner slowed down by an injury. Rest is good. Necessary. But also distressing.

Anyway, I chanced upon The Magicians through my beloved Overdrive app, and my slump dissolved. It was one of those reading experiences that Reader Me (and probably Reader You) lives for – the complete immersion, the instant investment, the can’t-stop-reading feeling.

You know what I’m talking about. It’s better than almost anything.

Quentin Coldwater is a high achieving 17-year-old with a tendency toward angst. Or clinical depression. One of the two. His life’s primary joy is reading fantasy novels, specifically the series Fillory and Further… which is really just an alternate imagining of The Chronicles of Narnia. Quentin’s ennui is lifted temporarily when he is tapped to enroll in a secret college. A college for magicians. The boy who wanted nothing more than to live in a fantasy novel… gets to live in a fantasy novel.

But probably not in the ways you think.

Lately, I have been attracted to books that blur genre lines. I’ve been a bit of a genre-nerd for some time now – all of my favorite literary questions are about narrative structure, reader expectations, and canonicity. What books do we get to call “literary” and what books do we not? Why do so many YA books have bad parents? What is the difference between an adult book about teens and a YA book about teens? What is the difference between a book teens like and a book adults like?

Genre-bending books, by their very nature, present these genre questions on a platter, almost requiring that you consider them as you read. The Magicians straddles the line between fantasy and realism. The narrative sticks closely to Quentin’s perspective – the book is missing that charming storytelling narrative distance that fantasy-lovers (like Quentin) adore. The result is a book that feels very different than a fantasy novel (especially a children’s fantasy), which may put off those actually looking for a “Harry Potter in college” reading experience.

What’s left is a very realistic coming of age novel about fantastic events.

As a girl who loves realism and is dipping her toes into fantasy, this combination basically flipped my lid. I was tickled. 100% delighted. I loved how awkward and unfocused and stumbling Quentin was, how he makes friends in an organic but occasionally painful way that took me right back to college. He whines. He pouts. He makes bad choices. He doesn’t quite know what he wants from the world. But really – who does?

But I was also quite taken by… well… all the magic. In the world of The Magicians, bagic isn’t a mystical ability, bestowed upon you at birth. Magic is an academic discipline and practice. A science. An art. Only the best and brightest can hope to practice it well and safely, but even the best and brightest college students are still college students. Quentin and his friends are intoxicated by the prestige and the secrecy and the endless possibilities that their field presents. Magic big and deep and encompassing and so, so powerful – Quentin and his friends learn just how powerful in some seriously painful ways.

This is also the rare fantasy series that doesn’t lose a bit of steam as the trilogy rolls along. I loved The Magicians, but then The Magician King introduces a second narrator whose story I found even more compelling than Quentin’s. The Magician’s Land was a bit slower – not quite as electrifying – but the conclusion was just so, so satisfying to me.

So yes, I’m glad I stopped reading Game of Thrones for a few minutes – long enough to find a new series to love. The surface parallels between the two series are pretty nonexistent. I’m definitely not claiming that fans of GoT will love this, but I found Grossman’s world-building just as thorough and inventive, his characters just as tortured and complex, and the Big Fat Ideas just as free-flying and immersive and wonderful. Like GoT, this series just transports me. Like GoT, I’ll be re-reading The Magicians for a long time.

~ You made it! The end! Merry Christmas! I’m officially On Vacation until January, but I will be back in the New Year! ~