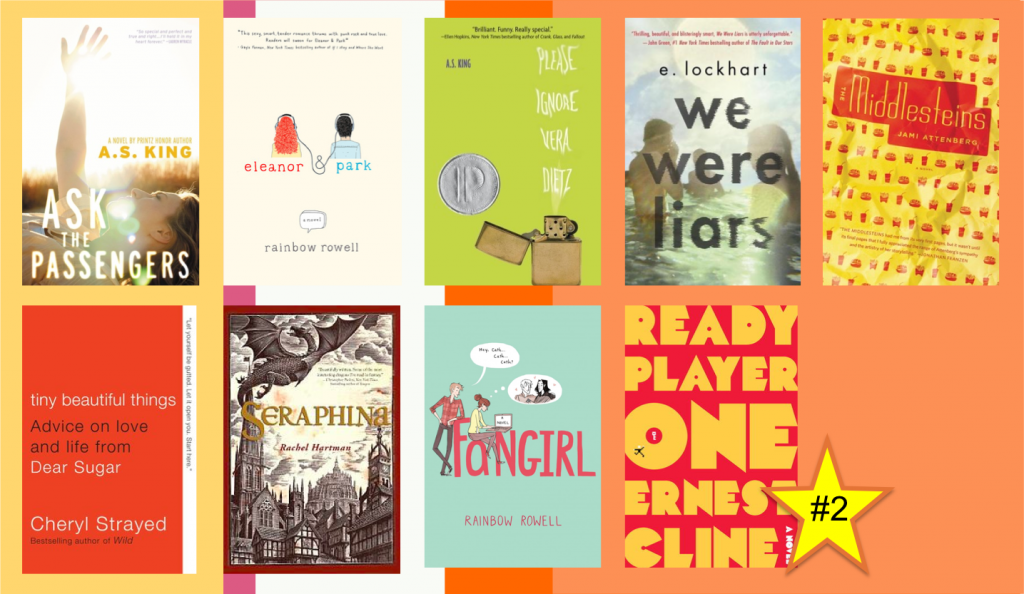 #2: Ready Player One by Ernest Cline

The year is 2044. Various political, economic, environmental disasters have left America and the rest of the world in a generic dystopian scenario, where the rich get richer and the poor live in towering stacks of mobile homes rife with poverty and crime. Wade Watts – a seventeen-year-old nerd – calls one of these teetering, vertical trailer parks home, but that’s not where life is. Life is on the OASIS – every day, Wade plugs into his computer and becomes Parzival, a svelter, cooler version of himself who attends virtual high school, hangs out with friends in a secret chatroom/bunker, and hunts for the Easter Egg.

The Easter Egg is Wade’s mission. His raison d’etre. The only shred of hope he has to escape his real-world poverty. Oh, and perhaps the only way to save the OASIS itself from an evil corporate takeover. Before he died, eccentric OASIS creator James Halliday planted an Easter Egg somewhere deep in his virtual-universe; his videotaped will reveals that the first to locate it will earn a controlling share in Halliday’s company. The winner will “own” the future of the OASIS. Chasing the Egg has become a global fixation, a nerdy past-time, a professional opportunity for those recruited by predatory tech companies looking to monetize the OASIS as it never has before. Halliday’s clues are vague. Almost nonexistent actually. The only thing Parzival has is an impressive arsenal of Halliday-approved 80s pop culture and video gaming history, a few egg-hunting friends, and despite a thick patina of sarcasm and cynicism, a heart of gold.

Well, I think that’s enough summary to convince you that this book is the province of nerds. I actually find it a bit baffling that this book found as much critical success as it did, but perhaps that’s the thing about being a geeky kid – like Halliday, like Parzival – you have this idea that you are alone in your geekiness. It’s not true, I suppose. Once everyone abandons whatever Game of Cool they are playing in high school and college, the truth comes out – yeah, I played Space Invaders on my DOS PC until my little seven-year-old hands hurt. Played Adventure and Humbug, too. I sneaked into my parents’ room after my bedtime to catch Monty Python reruns that appeared on PBS in the middle of the night. I didn’t return that Gameboy game you lent me, boy I dated. I didn’t break up with you when I should have because I was in the middle of Ocarina of Time on your N64 that you let me borrow, boy I dated.

Yes, Ready Player One is a nerd’s holiday, a nostalgia parade, a justification for all that probably meaningless pop culture that we Gen X/Yers hold in our brains. In the world Ready Player One, the geeks will inherit the earth. Or the OASIS, which is, arguably better than the earth. But beyond all that, Ready Player One is just effing exemplary storytelling. The competition provides strong narrative structure. The “quests” that Parzival and his friends encounter are clever, rollicking, and have high stakes. Cline ramps up the tension periodically as the race to finish Halliday’s puzzle comes closer and closer to an end, but this book reads more like Charlie and the Chocolate Factory than anything else – the reader knows the protagonist is in the right, and it’s clear who deserves to come out on top. The fun isn’t the will they win, but how will they win, and at what price.

(And how cool the next level will be)

Ready Player One was 100% the most fun I’ve had reading all year. Not only did Cline send me into multiple fits of geeky, nostalgic delight, he wrote a book that reads like a game. Or, more accurately, like you are hanging out with your best geeky friend. You watch each other play, gasping when they miss a jump, screaming out suggestions, your fingers twitching over invisible thumb-sticks while you try just one more time to beat that impossible boss.

Now excuse me… I have a variety of semi-legal game emulator software programs to download.