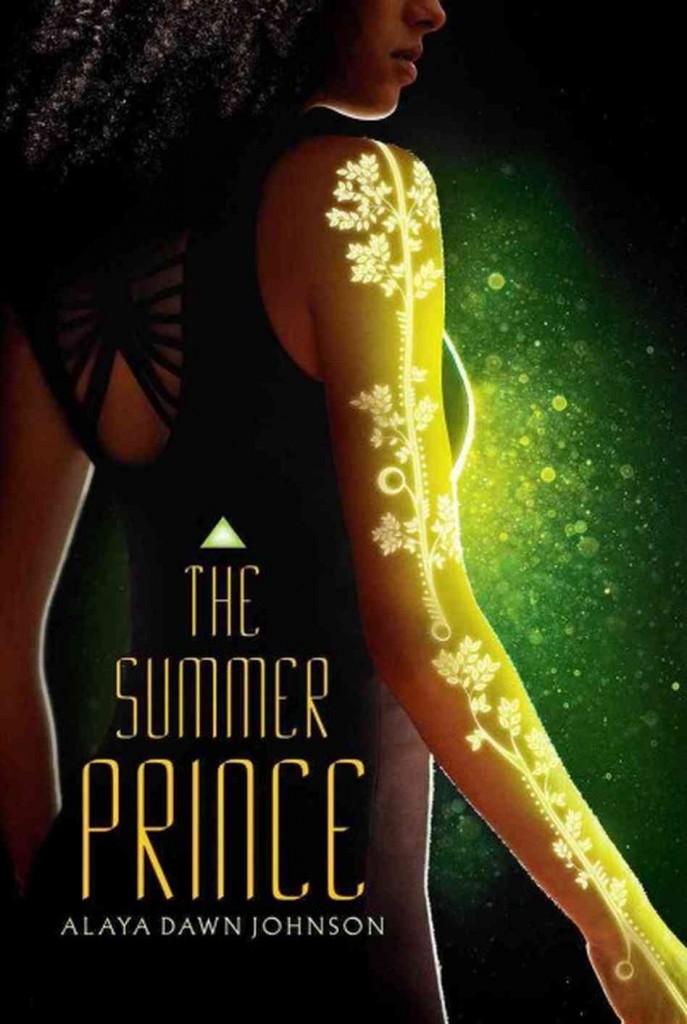 I crawled out of my anti-dystopia hole to read Alaya Dawn Johnson’s The Summer Prince. It was long-listed for the National Book Awards, so my modest hope was that I would not loathe it completely just because of its dystopiosity. And I did not loathe it at all! In fact, I enjoyed it.

June is a teenage street artist living in Palmares Tres, a city in futuristic Brazil. After world-wide nuclear fall-out, war, famine, etc, humans have survived in enclosed cities such as Palmares Tres, where elaborate, interactive technology weaves a careful symbiosis between the city and its people. In Palmares Tres, tradition, art, and a ruling matriarchy are revered; all attempts to hold onto the humanity of civilization in the face of such expansive technological possibility. Likewise, citizens are restricted from purchasing technology that interacts too closely with one’s own mind or physical appearance – “body mods” – that other cities are allowed. Palmares Tres is stuck between two different modes of thinking, two different visions of the future, between progress and tradition. Palmeres Tres’s most disturbing tradition is the transferal of royal power by electing a young boy as Summer King; after serving for a year, a figurehead beside the Queen who holds actual power, the King will be executed.  Enki – a boy who loves everyone he meets, who has a gift for subversive performance art – who wields his sexuality when he likes, is elected Summer King – June befriends him. And as is required in any proper dystopia, these two powerless characters begin to upset power structures in Palmares Tres.

I loved how carefully Johnson builds the world of Palmares Tres. With some fantasy and sci-fi, I get the feeling that the author has enjoyed creating a rich and intricate landscape, but because the world is so sprawling, the reader does not get to see very much of it. Palmares Tres is large, but contained – 90% of the story takes place within the walls of the city. You really get to enjoy Johnson’s attention to detail, and Palmares Tres becomes another character. And unlike other dystopias, June’s struggle against society isn’t entirely “us against them.” June wants progressive technology and wants to save Enki, but she also loves her city. She struggles at every step, knowing that any move too drastic may dismantle the safety of her fellow citizens. The pull between fighting the establishment and supporting it made for an interesting plot as well as adding depth to June’s character.

Also, you might notice that these teenagers are *gasp* not white. Or American. I never noticed how completely white-washed most dystopias are, until now. Even more reason not to read any more! Ha.

Some caveats. The plot is a bit complex. The ritual of electing a Summer King – a boy ruler, fated to die – is an integral part of the story’s plot that went a bit under-explained. And while I loved June when she was making her way in the world, creating art and staging political protests with her friends, her family conflicts with her mother seemed wedged in and a little forced. Some have taken issue with the accuracy and appropriateness of Brazilian culture. Not a perfect book, but I would argue that this is a progressive, exceptional dystopia; a standout in a sea of blargh. Once you’re done throwing Allegiant across the room, maybe pick this one up next.