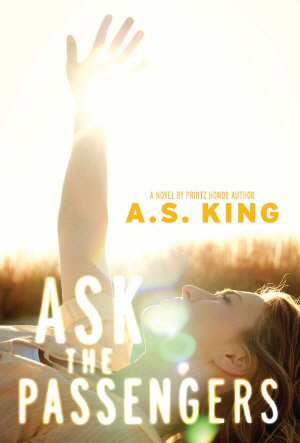 Astrid Jones is a lot of things. She is a senior in high school. She is a New Yorker whose parents moved her to Small Town Hell. She is the daughter less favored by a perfectionist mother.  She is no longer interested in learning trigonometry, but philosophy lights up something inside of her. She is the best friend to the Homecoming King and Queen, and the only one who knows they are both gay. She is a secret keeper, a sender of love into the universe, and oh, she might be gay.

Maybe. But why lean into a label if she’s not sure? Why not spare herself the consequences of coming out, when labels are bullshit anyway?

I read a lot of very positive reviews for A.S. King’s Ask the Passengers, but sometimes I feel like reviews hone in on one or two choice aspects of a book and hang the rest of the reading experience on those. This was a Coming Out Story, the reviews said. This is a story with King’s trademark Magical Realism.

I devoured this book in two day’s time, and I found it to be so much more than Coming Out and Magical Realism. The story does center on Astrid as she comes to terms with her other-ness in a very insular small town community – getting up the guts to live as herself in the world instead of keeping her identity precious and hidden. But the way King writes Astrid, it seems like sexuality is secondary to Astrid-as-a-Whole; it’s not just her weekly make-out sessions with the hot field hockey player she’s keeping to herself, it’s secrets about her friends and her family, about what she thinks about her mother and sister, her dreams and wishes. Similarly, the Magical Realism isn’t terribly magical. When Astrid sends her love up to airplane passengers overhead, and the narrative follows that love, giving you a glimpse of the life of a plane passenger, I didn’t read that as “magic” – I read it as part of that inner life that Astrid keeps to herself, that inner life that makes Astrid such a dynamic character.

Despite all that, I think you can tell that I liked this book a great deal. I liked it for being sharp and fast to read. I liked how the cast of characters around Astrid’s life in her small town were so richly developed, each one interesting, not a throw-away in sight. I liked how King made the We-Look-Perfect-But-Are-Deeply-Troubled Family trope feel entirely fresh. I liked how Astrid and her girlfriend have mismatched ideas about the pace of their sexual interactions, and instead of submitting Astrid pushes back; instead of fighting or breaking up, they have a rational conversation about it.

This one should have got a little more ALA love this year. Shame, shame. You should read it anyway.