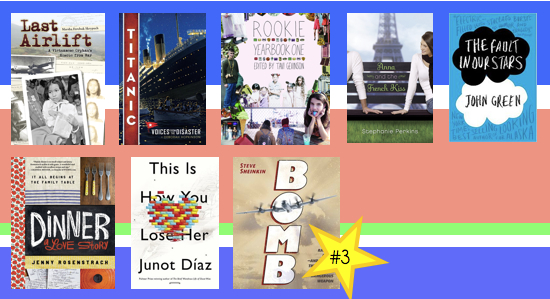 #3: Bomb: The Race to Build –and Steal — the World’s Most Dangerous Weapon

Once upon a time, I heard Mr. Steve Sheinkin give a speech regarding a little book he wrote about Benedict Arnold. Sheinkin, if I recall correctly, charmed all of us graduate students. This is probably not saying too much, since in the midst of seemingly interminable swamp of academics, job juggling, and constant overachieving anxiety, the promise of a free glass of wine and a plate full of cheese was enough to charm us – the presence of any young-ish, attractive-ish man who knew how to sting together a witty sentence or two was enough to send us into conniptions.

“Charming,” I recall thinking, “but the chance of me reading a book about Benedict Arnold is just exceeding, overwhelmingly slim.”

It took me about 25 years to actually give a rip about history. I don’t know what’s to blame – uninspiring public school curriculum, torturous memories of My Brother Sam is Dead and Sign of the Beaver, the overwhelming reading assignments in HIS 107, general Gen X/Y narcissism. I don’t even remember what tipped me over, but I get it now. The feeling of fascination when you learn something about your world that you didn’t know, that you probably couldn’t ever imagined. The feeling of incomparable smallness when you realize how much in the world you have missed, that you will never fully understand, that you will never experience. The feeling of divine interconnectedness when you realize that these fascinating events, these people who will never meet, the heroes, the villains – you are all part of this world puzzle, your life significant and insignificant in equal measure.

Maybe if I’d read Steve Sheinkin’s Bomb: The Race to Build — and Steal — the World’s Most Dangerous Weapon when I was an eleven or twelve year old, then I would have caught the bug. It’s one thing to read in a textbook that World War II ended when we dropped an atomic bomb on Japan. It’s quite another thing to have Sheinkin tell you, piece by piece, week by week, how political decisions led the US to pursue an atomic bomb, how a motley crew of the finest scientists were recruited to leave their careers and studies and figure out just how build one, how German, Russian, and American spies risked their lives to keep nuclear secrets from the enemy, or destroy the enemy’s attempts. This is nonfiction, yes, but this is nonfiction that rollicks and rolls and  reads like a spy novel… but a spy novel populated with geeky scientists, so much better than an actual spy novel.

So, Sheinkin has thus succeeded in making rote history (that I was supposed to learn about in five or ten history classes of my youth) interesting. Good job, Steve – your skills in plotting and tension are admirable. But what about all that feeling… that part that makes history not only interesting but meaningful. Well, let me assure you, Bomb has this in spades. With very careful research and top notch characterization, Sheinkin lets you know who each character is and why you should care about them, and why you should care about their contributions to history – large or small – and how their bits of influence have impacted our country, our culture, our world. This is especially commendable because, as you can imagine, the cast of characters that had their hands in the nuclear race and surrounding political conflicts, was vast. You will get to know them all.

And in case that wasn’t enough, I will tell you that the ending punched me square in the gut. I raced to finish, I was horrified of what I read, I stayed up late but wasn’t sure I’d be able to sleep.

This was a long way of saying, yeah, I’m gonna read that book about Benedict Arnold.