In October, I read twelve books. I probably should have read two more, since there are two unread books sitting on my coffee table waiting for me to read and review them by… oh… Friday… but alas, alack, it’s November now. Also, I’m a working mom of a toddler now, so there will just always be two unread, overdue books sitting on my coffee table. This is a way of life. 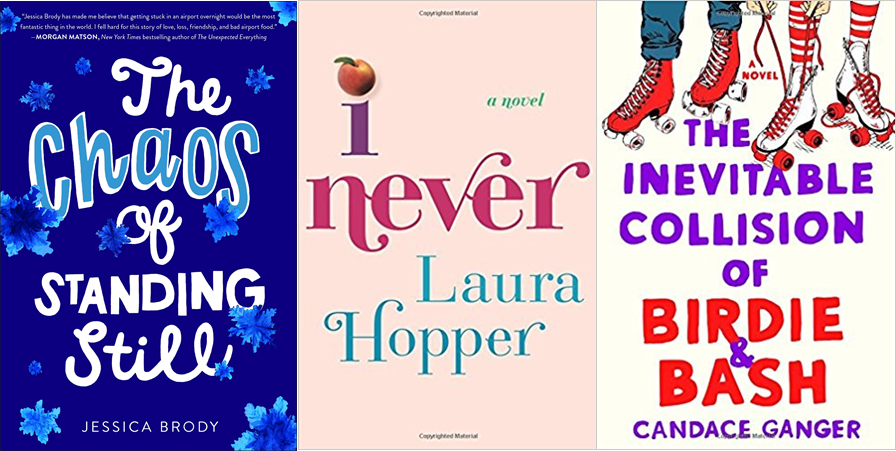 Yes, it is book review season yet again, so of the twelve books I read in October, eight of them were “assigned” reading. I don’t like to comment excessively online about books I’m professionally reviewing, especially before the reviews are published. But I’ll tell you that either I’m getting that much harder to please or this batch was just… not… good.

Of the bunch, the only one I’d recommend generally would be The Chaos of Standing Still by Jessica Brody. It’s a two teens with emotional baggage (har-har) meet-cute while trapped in an airport story (trapped-cute?), but with a solid voice. I also really liked Brody’s A Week of Mondays; she isn’t writing  isn’t hefty, hard-hitting YA, but instead solidly constructed light-reading that is actually funny and not just trying to be. Which I think could be the definition of a pleasure-read.

I listened to four audiobooks this month; three nonfiction “general listening” and one fiction – After Birth – that was my falling-asleep-in-bed book. I don’t listen to a lot of fiction audiobooks – I think because, increasingly, the kind of fiction I want to read is the kind I *really* want to pay attention to, which can be harder for audio. I often start a fiction audiobook, decide there’s something about the narrator or my particular state of mind or schedule that will keep me from fully paying attention, and then switch to nonfiction. But something did draw me in about this book, although it’s hard to say if I truly *liked* it. It had one of those narrators that inspires everyone on Goodreads to log in and write about how much they hate her. I don’t think I would choose to hang out with her (if she was an actual person WHICH SHE IS NOT), but I thought she was a kind of uncomfortable bizarre mix of being the singularly focused, attachment parent who annoys the hell out of everyone, but who also doesn’t like hanging out with her baby. And who writes about postpartum mothers in fiction? Nobody. It was pretty dark and sometimes off-putting, but I’m down.

Swinging wildly in the other direction, Erica Kosimar’s Being There was a nonfiction treatise on how wonderful and important early motherhood is. It’s generally attachment parenting theory stuff, but with a somewhat novel psychoanalytic rationale. Yes, it made me a little uncomfortable to be listening to a book that was insisting that mothers spend as much time as humanly possible at home with their under-three-year-olds while I was commuting to or working at my full-time job – or even while I was cooking food for my under-three-year-old in the other room. But I’m also not sure her arguments really stand up to much logical scrutiny. I was also struck by how little Kosimar has to say about toddlers and preschoolers. I was reading with a just over one-year-old at home, thinking I’d find advice for 2 of the 3 important years, but it was really 90% about under-ones. So I took from this what I found persuasive and left the rest. In particular, I’ve been trying to really focus on being present with my kiddo, or at least present-er: to keep my phone out of my hands, to stop trying to cram chores and errands and to-do’s into our time together, and to pay attention.

Then, two memoirs. Or rather, one “I did at a thing for a year!” blog-turned-book and one book by a memoir-ist about how to write memoir. In case you couldn’t tell, I liked the latter more than the former. I’ve never read Mary Karr’s memoirs (shame!) but I found The Art of Memoir to be very easy to listen to; I’d feel confident recommending it to both memoir-writers and memoir-readers… or at least literary memoir readers. Year of No Sugar was most certainly not a literary memoir. Not that I was assuming it was – I definitely checked it out looking for something light. A fluff memoir. I like these. But this one wasn’t even satisfying fluff. It was mostly a long reiteration of how freaky it is that Sugar is All Around Us, the quest to find the best sugar substitutes for baking, and just how hard it was to avoid sugar at this party or that potlock and how we just broke down cheated at this cookout. I was hoping for something more contemplative… and also something more about what they *actually* ate rather than what they didn’t. Also, there were a few weirdly judgmental passages about overweight people that were really hard to ignore.

As for the rest? I managed to squeeze in three non-required, in-the-flesh, pulp-and-ink books.

I talked a little bit about The Four Tendencies here. It was a quick, fun read, but I suspect it would only be fun if you are just weirdly into personality typing or are a tried and true Rubinette. And I am certainly both.

In October, I followed a whim and began to re-read Lucy Knisley’s graphic memoir oeuvre, chronologically. I read French Milk and Relish, the two foodie-ist of her books. I’ve been following her pregnancy and baby-related Instagram feed pretty religiously, since our kiddos are just the same age; she’s created some mini-comics there about life before and after being a parent that made me think about the themes of family and self-discovery that run through her other works. How fascinating to look at a so many small memoirs that capture a woman’s youngest adulthood – the years not often memoir-ized – and then to follow them into the transition of parenting! I’m calling this a little “side project” (sorry, Alice) and try to pick these up when I forget my required reading book somewhere. I thought I might finish Age of License in November, but my toddler hid it from me in the coffee table drawer for a few weeks. Way to wise up, Jessica. Way to wise up