I am three months into my maternity leave. I’ve had plenty of time to get into the *conceptual* groove of parenting if not the *actual* groove. That’s to say, my brain is slightly more amenable to non-baby-related notions, but I’m still far from figuring out how and when to… well… do anything about those notions. Heck, I can barely figure out how and when to eat lunch. But all caloric deficits aside, I’m starting to think about Stuff I Used to Do and Things I Used to Be Interested in. Like reading new YA books.

Unfortunately… it just doesn’t seem like the new YA books are interesting me this year. It could be the luck of the publishing season. It could be that my tastes are changing and that I’m having trouble divining the kind of YA book that I would like to read. I think I’ve written about this before, and I could probably write more. But although YA is purportedly still booming, with tons and tons of books to choose from, I had trouble coming up with just a handful that caught my attention. I’m sure there will be more titles of interest once more reviews come out and Fall awards buzz starts percolating, but for now, here’s a few that I might read this Fall.

(Or I just might keep reading confessional memoirs, parenting manuals, and Game of Thrones. WE SHALL SEE!) 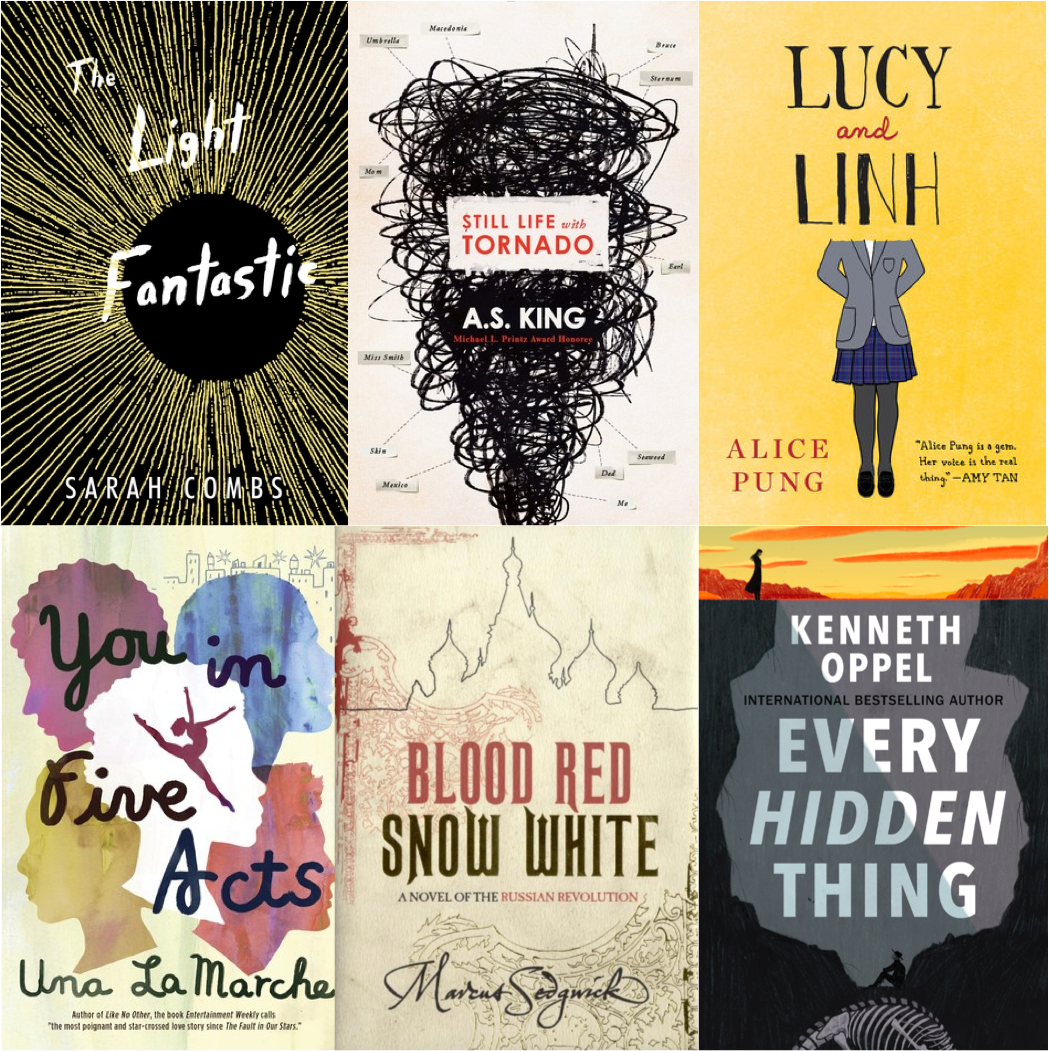 The Light Fantastic by Sarah Combs

An exception to my general unimpressed-ness? Candlewick’s fall YA lineup. Candlewick has like, three or four YA titles that look really great. I chose this one even though it’s about one of my least favorite YA contemporary topics – school shootings. Last year I read and enjoyed Combs’s debut, Breakfast Served Anytime – I found it to be a thoughtful character-driven coming of age story  – so I’m hoping that this novel might bring a quieter, resonant voice to the high-concept story-line.

Still Life with Tornado by A. S. King

After Please Ignore Vera Dietz, Ask the Passengers, and Glory O’Brien’s History of the Future, if A. S. King writes, I shall read.

Although I did miss her last (and purportedly weirdest) I Crawl Through It. I don’t think now would be a great time for me to pick up something narratively challenging (see: all the memoirs), so I’ll skip one. And come back to it. Someday.

Lucy and Linh by Alice Pung

Oh look! A dual narrated book that’s not being pitched as the next Eleanor & Park! What a novelty. Maybe because this one has two female narrators – Lucy who’s off at fancy private school and best friend Linh who is left behind – who don’t seem to be romantically involved Well, I mean, I haven’t read it, so maybe there’s a romantic second act twist! Anyway, speaking of pitches, this one is billed as “Gilmore Girls meets Fresh Off the Boat,” which I can dig.

You in Five Acts by Una LaMarche

Speeeeeeaking of the next Eleanor & Park, remember 2014’s Like No Other? I liked it, but it didn’t blow me away. Certain authors write YA stories with premises that always pique my interest, but the execution doesn’t *quite* get there: I’m starting to think LaMarche is one of those. HOWEVER, I will challenge my own skepticism for multi-voiced books set in prestigious performing arts high schools. I will also gladly do a little FAME! dance for you the next time we meet.

Here’s another kind of author: the author who doesn’t not write stories that have anything to do with MUSIC! DANCE! or ACTING! or even high school for that matter. But everything he writes is like nothing else I’ve ever read, and everything he writes is festooned with literary accolades and awards. So while Fun Fame books beckon, I should probably add Mr. Sedgwick to my Must Read list. Honestly, I have no idea how this is considered a YA book – it’s narrated by a fictional version of an actual British author and is billed as a “Soviet Thriller.” Now have you ever read anything like that? I thought not.

Every Hidden Thing by Kenneth Oppel

Mr. Oppel is a favorite of some of my more fantasy-lovin’ friends, but he’s not an author whose work usually calls to me. I read Airborn in grad school – it was fun but too steampunk-y for my tastes. I read The Boundless for the William C. Morris seminar – it was fun, but a little too middle-grade-y and a bit too indulgent in the historical cultural stereotype. I read The Nest for my book club – it was fun, and suuuuper creepy. Anyway, the common denominator seems to be “fun.” And since I pretty much don’t like any of the YA that I usually like these days, maybe I’ll give a YA about dinosaur bones a try.