It is the end of the month and I have read basically zero of the books I’ve checked out and that means they will still be here when all those books on hold come in and now I am in hold jail. Also, it felt like negative degrees this morning so I’m considering putting myself in apartment jail, too.

And then I remember that this time last year I was languishing in a freezing cold apartment, barely ever leaving my bedroom or even my bed and never the actual house. So I’m doing okay.

But I still have a shit-ton of books checked out and need to read much faster because I might die without having read them all. 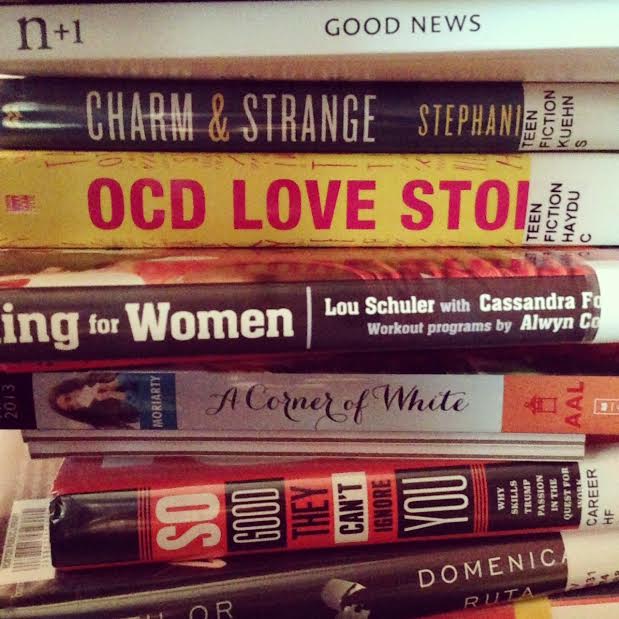 The Circle by Dave Eggers

The Antidote: Happiness for People Who Can’t Stand Positive Thinking by Oliver Burkeman

Life After Life by Kate Atkinson

The New Rules of Lifting for Women by Lou Schuler

So Good They Can’t Ignore You by Cal Newport

The Forest for the Trees by Betsy Lerner

Hyperbole and a Half by Allie Brosh

What the Most Successful People Do Before Breakfast by Laura Vanderkam

All the Truth That’s In Me by Julie Berry

Beyond Belief by Jenna Miscavige Hill

The Drama of the Gifted Child by Alice Miller

The Essential Guide to Children’s Books and Their Creators ed. by Anita Silvey

The Girl Who Circumnavigated Fairyland in A Ship of Her Own Making by Catherynne M. Valente

In the Shadow of Blackbirds by Cat Winters

The New Rules of Lifting: Six Basic Moves for Maximum Muscle by Lou Schuler [for The Boy]

With or Without You by Domenica Ruta

The Encyclopedia of Early Earth by Isabel Greenberg

The Way of the Wizard

Sea of Hooks by Lindsay Bell

This is Where I Leave You by Jonathan Tropper

My Education by Susan Choi

The Signature of All Things by Elizabeth Gilbert

The Goldfinch by Donna Tartt