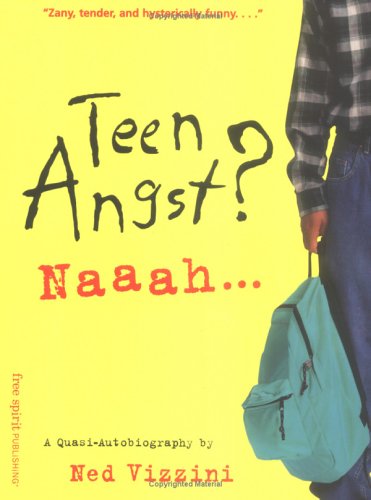 I’ve wanted to post something about Ned Vizzini since he died, but I’ve been unsure of what I can say. What I should say.

Most of us who have passions have a story to tell about our passion. An origin story. The friend who lent you that book. You know, the book that changed your life. Or maybe it all started at school, when you picked up an oboe for the first time, took the class that flipped on a light switch in your brain, met the teacher who spoke directly to your soul.

My origin story includes Ned Vizzini. My mother handed me a thin yellow galley – maybe my first galley? – and told me I might like it. It was Teen Angst? Nahhh, Vizzini’s first book, a collection of essays he’d written while still in high school.

Ned’s essays floored me. They delighted me. They were stories about family, about feeling different, about feeling too nerdy to get by but getting by anyway. Ned was just a little bit older than I was. He was young. He was writing about being young. He was writing well. I’d read YA lit before – loved YA lit – but this was something entirely different. Something special.

I read and re-read this book many times as a teen, and when Be More Chill came out in 2004 I was excited. So was my sister. Ned was running his own book tour, insisting that he and his girlfriend loved road trips and would drive anywhere that would have him. My sister – my shy, introverted, nervous sister – called me at college and told me she’s talked to the principal and she’d emailed Ned and he was coming. To our high school. What on earth.

Something fell through on the school’s end, though, and Ned wasn’t to come. He felt bad. He emailed my sister and invited her to come to another school event, an hour away. I came down from school and we drove into the sticks together. We sat in a strange rural middle school cafeteria, the odd teens out – were we groupies? Fangirls? Sisters who couldn’t pass up a once in a lifetime chance?

We met Ned, briefly, afterwards. I remember that he knew my sister’s name, that he was much more excited to be hanging out in rural Michigan than I was, and that he seemed so much younger than me. He had a strange, guileless energy. Like he might say anything. Like he might respond to your emails if you asked him to visit your high school, even if you were a sixteen-year-old girl.

When It’s Kind of a Funny Story came out in 2006, I knew what a galley was and I was happy to get one. When I read that Ned based the book on his time in a mental health unit, I wasn’t surprised. When the book found a broad audience – many teens and young people who themselves struggled with mental illness – I wasn’t surprised.

But when I read that Ned had killed himself, I couldn’t believe it. I read in an interview somewhere that he thought he was still struggling. That he was always going to struggle. But he had coping mechanisms. He wasn’t having suicidal thoughts. Things wouldn’t ever be great but they could just be.

I’m a person who is deeply, irrationally invested in believing the best things people say about themselves. Probably because I spend so much time crafting my own, hoping that someday I will be the person I imagine myself to be. Hoping that everyone believes me. I’m sorry you were in pain, Ned. I’m sorry you had to go so soon. Thank you for starting early and hanging on, for writing your books, for letting me be a weirdo in your middle school writing workshop, for being a tiny, tangential part of my own story. Thanks so much.