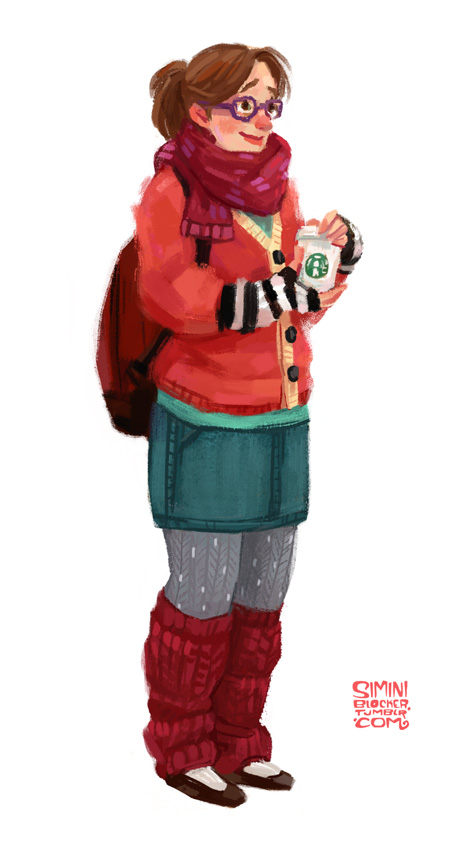 Rainbow Rowell’s Fangirl was one of my favorite books of 2013. Along with the rest of the reading public. I know.

Why bother to heap even more praise on a book that’s had plenty? Well, I just re-read it, and there was just so much to love that I didn’t get to tell you about the first time. Indulge me.

Coming of Age… as an adult

Alright. I guess we can talk about New Adult again for a moment. I am still a skeptic of this supposedly burgeoning literary genre. I don’t think it is appropriate or accurate to give every book about an 18-24 year old a particular label. I think genre traditions and definitions run deeper than “age of characters” – slapping on an age-based descriptor regardless of other narrative factors ignores genre traditions and can mislead readers.

Is Fangirl New Adult? Is it Adult? Is it YA? A big part of Fangirl’s wide attention is that it does sit squarely in that area of Adult/YA crossover. Cath is a character with broad introverted, nerdy girl appeal, regardless of the age of said nerd.

But the book’s YA-ness is really hard to deny. What Rowell has done is write a very traditional coming of age romance and set it in the very beginnings of adulthood. Although Cath is a grown up, her story feels about as YA as YA gets.

I would argue that Rowell achieves this in part because she grounds Cath’s story inside of another story – the Simon Snow series. Simon Snow – the focus of Cath’s creative attention for years – is a (meta?) fictionalized Harry Potter. Which is a work of children’s/YA literature, and also a school story. Set against these two touchstones, Cath’s move to college feels more like a move to boarding school than an exodus into adulthood – like she’s moving out of the space of childhood but clearly hasn’t left yet.

The meta-fictional contrast between Hogwarts, Simon Snow, and state college is a unique and ingenious narrative tactic, regardless of what label you want to slap on the book.

But what I really think separates Fangirl from the traditions of adult literature is Cath – more specifically, how Rowell lets Cath steer the story.

I have read a handful of books about college students written for an adult market. All of these books have been decidedly about college as an institution, about learning and knowledge and power. About the place of higher education in the world and in the lives of individual students. The characters may be interesting and well-developed, but they also feel a little like pawns in some kind of grander allegory.

Last year I read Rebecca Harrington’s Penelope. I talked a little bit about it in this post. Like Fangirl, Penelope is about a shy, nerdy girl who feels socially awkward while she dive into her first year of college. Like Cath, Penelope faces new social situations, romances, and experiences the triumphs and pitfalls of becoming an independent adult-type student.

Comparing only premise and plot, it would seem that these two books are quite similar. Readalikes, maybe. But I would argue that Penelope the book is not about Penelope the character. Penelope the book is about Harvard. It is about cultural, intellectual, and social capital amongst 18 to 22-year-olds. It is about various collegiate rituals and requirements and how absurd they are when observed from a distant lens. Penelope stands in for any girl, her quirks, traits, and desires tailored to fit the needs of certain metaphors, to elucidate a larger Big Idea.

Fangirl does explore a fair amount of Big Ideas – most of them about art and authenticity and what sacrifices are required to divine out your own passion and abilities at the tender age of 18 – but ultimately, the story is about Cath. It’s not an extended metaphor starring an awkward young coed – it’s a story about a specific awkward young coed with metaphors thrown in for set dressing.

And I think my previous post pretty much sums up why Cath is a character worth caring about. At least if you are an introverted nerd girl. After a recent twitter exchange, it has come to my attention that Cath may in fact be an INFJ. This explains my personal affection toward her – as an INFJ, I feel a special kinship with most of my Myers-Briggs mates.

This has also opened the door to literary Myers-Briggs speculations. This is probably not a particularly useful way to spend one’s critical energy, but I’m afraid once you’ve fallen down a rabbit hole it can be difficult to climb out.

Ms. Rowell’s writing is slick. It’s the kind of narrative that almost slips under the story and the excellent dialog – you almost don’t notice it, but you are enjoying it. I feel like some of Ms. Rowell’s critics do not give her adequate credit for her writing chops. It’s like that whole “I don’t want to look like I’m wearing make-up so I will wear seven times as much make-up as anyone else to achieve the all-natural look,” thing. Or watching women’s gymnastics. It takes a lot of skill and a lot of work to make prose read easy.

In Fangirl, Rowell’s tight third-person narrative shows off her skill for the descriptive simile.

Cath put on brown cable-knit leggings and a plaid shirtdress that she’d taken from Wren’s dorm room. Plus knit wristlet thingies that made her think of gauntlets,like she was some sort of knight in crocheted armor.

Cath set the phone on her desk and leaned back away from it. Like it was something that would bite.

But Cath didn’t worry about Reagan, not like she worried about Wren. Maybe because Reagan looked like the Big Bad Wolf – and Wren just looked like Cath with a better haircut.

“Me?” Cath gagged on her pot roast sandwich. “You look like you need fresh DNA.”

Reagan wore eyeliner all the way around her eyes. Like a hard-ass Kate Middleton.

Clever, yes. Entertaining, yes. But oh, please do not dismiss these lines as set dressing. Lines such as these channel Cath’s point of view into the third person narration. They capture something about the scene and about Cath’s attitude toward it, and Rowell knows just when to employ one. This is the kind of genius comedic writing I fear my puny brain could never manufacture. This is why Rowell is deserving of her heaps of praise, even though her prose is more straightforward that literary, even if she’s writing love stories.

I could go on. Oh, I could. But we’ve reached 1000 words of Fangirl-love, and guess who just got an e-galley of Landline today. Me. ME. I have got reading to do.

Image credit to the imminently talented Simini Blocker. If you haven’t checked out her work yet, please do. She’s like my patron saint of YA fan art. Run quickly. And while you are at it, hire her to illustrate all the picturebooks ever. This chick is going places.