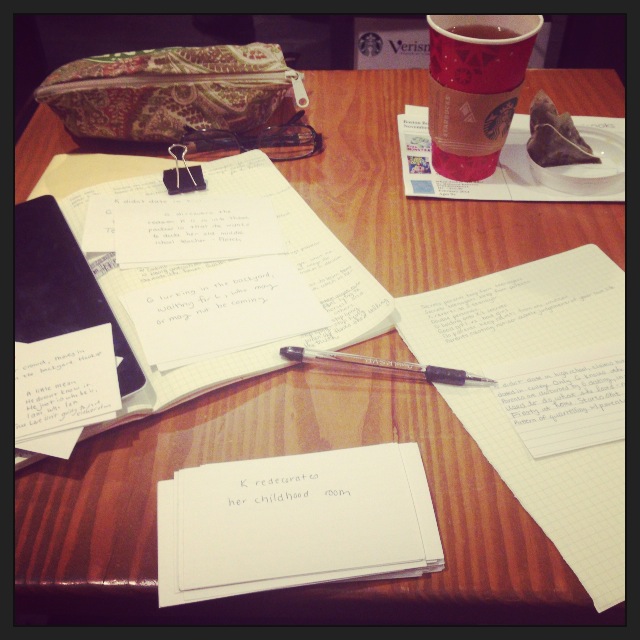 I’m pretty sure writer’s block is not a thing, but anxiety definitely is. Thought-consuming, brain-addling creative anxiety.

My Bad Brain. In Bird by Bird, Anne Lamott calls it KFKD, the radio station blasting in your ear reminding you how awful you are. I get that, yes I do, but I think my own breed of anxiety has grown even more insidious. My Good Brain says, “hey, here’s a shred of an idea.” My Bad Brain shows up almost instantly. “Well, if you use that idea, then XXX won’t work and it will be too YYY and then you might want to save that for ZZZ and you’d have to XYZ before you ABC so you might as well not.” Before an idea can exist, much less a word show up on a page, Bad Brain shuts the whole operation down.

A few years ago, I had a significant relationship revelation. I don’t remember the context of our conflict, but I remember feeling so upset that after years and years of being together, things were not getting easier. We were having the same arguments we had when we were 19, 21, 25. I wanted him to do something, to be something. He’d say he was doing that something. I’d say he wasn’t: maybe he thought he was doing that something, but he needed to do it differently, or better. He’d get upset because, from his perspective, I was calling him a liar. This kind of argument never gets resolved. It stays with you for days, that simmering post-argument angst, until it explodes again at some later point with a different “something.”

Later, alone, I worked myself up back into tears. I wanted him to treat me a certain way. He didn’t want to. He obviously didn’t want to because if he wanted to, he would have ABC’d or XYZ’d.

From somewhere in my stressed out, over-scheduled, grad school brain, a single, clarifying question appeared and completely shut me up.

What if you are wrong?

Things That Are Working With Writing

4. Books, blogs, and podcasts about storycraft.

5. Some strange writing things that are dangerously close to plagiarism, but aren’t really plagiarism.

6. Waking up at 5:30. Exactly thirty minutes of Skyrim with coffee, then only-writing until it’s time to leave for work.

7. A cappella albums on Spotify.

8. Getting into the story every day, lest your story start to feel like a strange, foreign place you don’t want to be.

10. Saving up for a new laptop. With luck, I will have enough pennies before my current laptop cracks into two pieces.