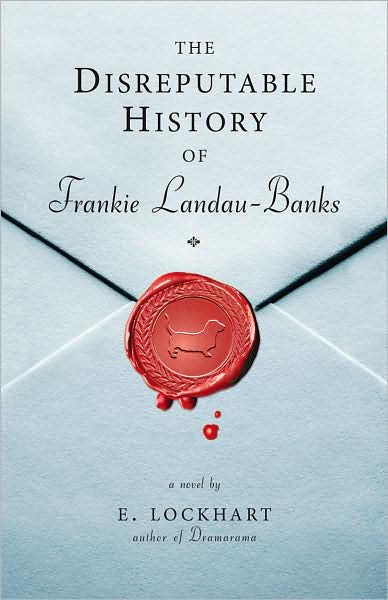 Have I ever told you about this book? One of my all-time favorite books? This book I once tried to read while driving 70 mph up US-127 North? No? Yes? Either way, consider this an ode to The Disreputable History of Frankie Landau-Banks by E. Lockhart.

Frankie is a sophomore at an academically elite boarding school. She is a normal girl – smart and ambitious compared to some of her schoolmates, but normal. Over the summer, puberty arrives and she becomes a fairly hot girl. When she returns to Alabaster, her new-found hotness lures in Matthew Livingston – senior BMOC (do people still use this acronym/phrase?) – who finds her sexy, adorable, and good company. Life would be good for Frankie, but when Matthew ditches her to partake in purposely vague activities with his group of guy friends – guy friends who she likes and who like her – she can’t help but feel jealous. And suspicious. And curious. One night she follows Matthew and finds out they are part of a longstanding, all-male society.

Frankie can’t figure out why her chromosomes prevent her from joining the group, but they won’t even talk about it, much less let her in. So why not just infiltrate their ranks from afar and trick the Loyal Order of the Basset Hounds into perpetrating acts of art-protest-chaos across Alabaster’s conservative campus?

Why not, Frankie? Why not.

I suspect that a plot summary alone might be enough to convince you to read. This is an incredible concept for a work of contemporary young adult realism – (Traditional boarding school tale + urban exploration  + secret societies) to the power of (the patriarchy + social philosophy). Oh, and in case that’s not enough, there’s the Frankie and Matthew romance, which is actually an incredibly subtle love triangle. This is a tightly written, quick-paced romp of a story that somehow captures everything else I just mentioned. A work of literary genius, basically.

But that is not why I have an undying love for this book, why it’s one of my favorite books of all time, why I could read it over and over and over again without questioning my judgement for a moment.

I love this book because it’s a book about a teenage girl who cares about boys and clothes and friends, but she also does stuff.

E. Lockhart has a way with this kind of character. I said it twice already – Frankie is normal – but in the world of teen girls in YA novels, she’s unique in that she’s not quite so interested whether she’s getting along with her mom/brother/boyfriend/crush/best friend. She does care about that stuff, but there are bigger questions going on in Frankie’s head. If she has a weird interaction with her sister on the phone, she doesn’t spend a chapter stewing over their relationship, she hangs up the phone and rolls her eyes and gets on with her life. When Matthew doesn’t let her touch his china Basset Hound and gets weird about it, she doesn’t start a fight or mope or have internal debates about their relationship: she makes an assessment and uses that information to better understand how power works in his secret society. Frankie is practical. She makes things happen. It’s a refreshing thing to read.

I love this book because Ms. Lockhart’s writing is a thing to behold.

I appreciate her skill more with every re-read. This most recent read, The Boy sat with me on the couch while I was reading. I asked him if he wanted me to read a little to him and he humored me. It was the scene with Porter and Frankie at the snack shack, where Frankie verbally abuses Porter because, well, he is her ex-boyfriend who cheated on her and deserves some retroactive verbal abuse. Anyway, the scene was 100% dialogue, and I was reading both parts aloud.

It started off awkward, but after a few paragraphs it was like, the words carried me into some kind of High School Theater Flashback – there were intonations and gestures and I think The Boy got a phone call in the middle of the scene so I stopped but then picked right back up once he hung up because the tension between Frankie and Porter was just in my apartment at that point. We had to finish it up.

That is some damn good dialogue. Just saying.

I love this book because the final scene between Matthew and Frankie? Kills me.

I don’t want to spoil anything, so stop reading now if you are super-concerned… but the place that Frankie and Matthew end up at the end of the story is just this raw, awful moment when you realize that the person who you thought knew you the best has no idea – no idea – what you are, who you are, how you are. And never has. You’ve been alone the whole time. God. It’s an intense scene and Lockhart nails it.

And most of all, I love this book because Frankie is an anti-heroine. A fifteen-year-old girl bad-ass anti-heroine.

I’ve been reading the first few chapters of John Truby’s The Anatomy of Story, which is all about developing ideas into stories. The starting place is your protagonist. According to Truby, what makes a story a story is your heroine’s weakness. She needs to make certain changes in her life in order to overcome this weakness – changes that are internal are psychological needs, changes that have to do with how your heroine treats others are moral needs. All of this adds up to a problem that the heroine faces that drives the rest of the story. Once the heroine addresses her weakness through her psychological and moral needs, then she can solve the problem and the story’s end is satisfying.

I’ve tried to apply this model to Frankie and it just doesn’t fit. Frankie isn’t without faults – she’s pushy, she’s not always a good friend, she’s obsessive, she’s manipulative. Some of those could be psychological and moral needs… but the story doesn’t end with Frankie learning to treat others better. In fact, Lockhart does this genius thing where you are pretty sure that all of Frankie’s faults would be strengths if she was a boy, and that her problems aren’t really her problems, but side effects of the patriarchal power structures in the way men treat women, in her boarding school, and in the world.

Frankie isn’t trying to conquer her own demons. She’s trying to SAVE THE WORLD! THROUGH FEMINISM! AND DEFYING THE PANOPTICON! AND HANGING BRAS ON PORTRAITS OF OLD MEN!

Well, now you all think I’m crazy. But you know what? Everyone thought Frankie was crazy, too. Just read the book already, okay??