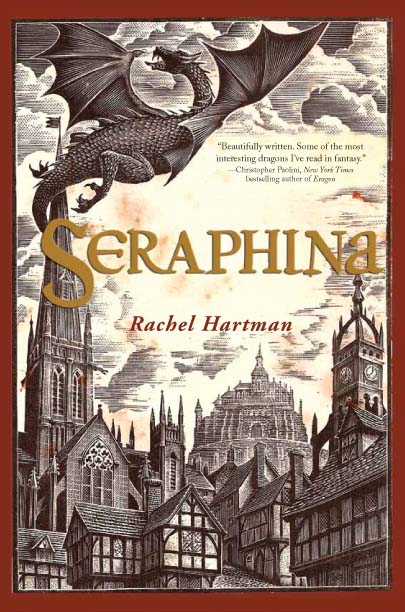 As I think more about The Books That People Really Love, I keep thinking about fantasy. [Insert a few witty sentences about how I don’t really read fantasy here]. Not liking fantasy never felt like a strange thing until, of all places, grad school. My program was a haven for lovers of Tamora Pearce, Madeleine L’Engle, Lloyd Alexander, Donna Jo Napoli – of Twilight, even, and of course, Harry Potter.

When I have that conversation about favorite books with my classmates, the titles they hold onto are those that reliably took them from here to another world.

Reading Rachel Hartman’s Seraphina, I started to get it. The cover was the first step – you don’t see line art on YA books much anymore, even fantasies, much less landscapes. This is a book that has a place, a place you can see on the cover, that you will visit when you read.

This was not a book that I read easily. The prose is dense, sentences that you can tell were “crafted” and not just written. The plot is political and interpersonal, and with a large cast of characters with eccentric names, it was sometimes hard to follow. There are stories going on inside of an aristocracy, outside of an aristocracy, and an entire plotline that exists inside of Seraphina’s head – until maybe it doesn’t.

But the characters, especially Seraphina, were compelling, making me want to learn more about this strange place, about their lifestyles and politics. In Goredd, dragons and humans coexist, but only due to a tentative treaty that many believe should be revoked. Dragons are the arguably superior beings, gifted with more intellect, logic, and special skills, including the ability to take human form. Humans allow some dragons to live among them, but only if they wear a bell around their neck or contribute to society in some meaningful way. The political plots focus on these tensions between dragon and human, which have very obvious parallels to race and cultural relations in our world today; Hartman implies these connections with an expert’s subtle hand.

The personal plots focus on Seraphina, a half-dragon, half-human living as a human in a world where neither dragon nor human even acknowledge the biological possibility of such miscegenation. She’s undercover, but her combination of dragon and human skills make her a superb musician, so she gets a job in the castle and slowly gets involved with dragon-human politics.

Every time I picked up the book, I would read a few pages and feel a little internal sigh, a little “urgh,” a little “what’s going on in the Internet right now?”

But if I read for a minute or two more, then I was just in the book. Not really aware of the reading process, necessarily, not flipping pages because you’re impatient for a plot’s ending, not reading because the reading’s easy.

I just went somewhere else. And that, I think, is something you don’t easily forget.