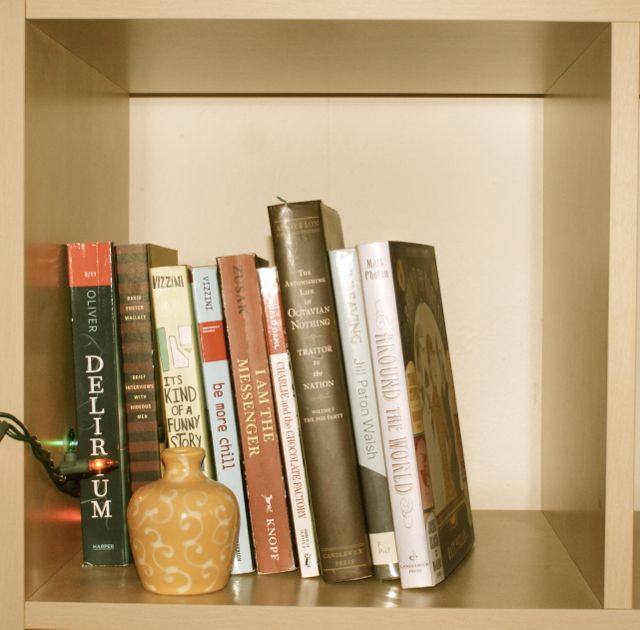 This edition of the Library Card Exhibitionist comes with the following complications:

1) On December 6th, I checked my account and noticed that a VAST majority of my checked out books were due on December 7th. And a frightening majority of that majority hit up against the five renewal limit, or were requested by other patrons.

I have a bad back/neck/shoulders, so to maintain my health and happiness, I am now sticking to a strict “No More Than 2 Books in Your Purse” rule. Unless I can trick The Boy into serving as my beast of burden with a full back-pack, I am doomed to overdue hell for awhile.

2) On December 3rd, I put a random hold on yet another book that caught my eye for one second and I thought about the shelf of (soon to be overdue) books on my shelf at home and I said to myself “JESSICA YOU ARE OUT OF CONTROL.” I have put myself in Hold Jail for awhile. I mean, I went ahead and put any books that I simply MUST read on hold on December 3rd, but other than that, I am done for awhile. I am not sure when I will be released from jail, but it will be awhile. It is about Kid Lit awards time, too – please admire my restraint. Or question my adherence to arbitrary, self-imposed rules, whichever you deem more appropriate.

Anyway, I am a neurotic librarian who needs more meaningful hobbies, but on with the show?

The Statistical Probability of Love at First Sight by Jennifer E. Smith

The Checklist Manifesto by Atul Gawande

The Particular Sadness of Lemon Cake by Aimee Bender

Rules of Civility by Amor Towles

You’re Not Doing it Right by Michael Ian Black

Well Fed: Paleo Recipes for People Who Love to Eat by Melissa Joulwan

The Truth About Forever by Sarah Dessen

The Plant Hunters by Anita Silvey

The Molasses Flood by Deborah Kops

Life as We Knew It by Susan Beth Pfeffer

Superman versus the Ku Klux Klan by Rick Bowers

This Lullaby by Sarah Dessen

Titanic: Voices from the Disaster by Deborah Hopkinson

Anna and the French Kiss by Stephanie Perkins

The Raven Boys by Maggie Stiefvater

Checked Out and Overdue (!)

The Impostor’s Daughter: A True Memoir by Laurie Sandell

Brazen Careerist: The New Rules for Success by Penelope Trunk

Marbles: Mania, Depression, Michelangelo, and Me by Ellen Forney

Meant to Be by Lauren Morrill

The Pirates! Band of Misfits

The State: The Complete Series

The Little Book of Talent by Daniel Coyle

It Starts with Food by Dallas Hartwig

Love and Other Perishable Items by Laura Buzo

Get Some Headspace: How Mindfulness Can Change your Life in Ten Minutes a Day by Andy Puddicombe

The 12 Tribes of Hattie by Ayana Mathis

Days of Blood and Starlight by Laini Taylor

The Middlesteins by Jami Attenberg

Beasts of the Southern Wild

Bared to You by Sylvia Day

The Signal and the Noise by Nate Silver

How Children Succeed by Paul Tough