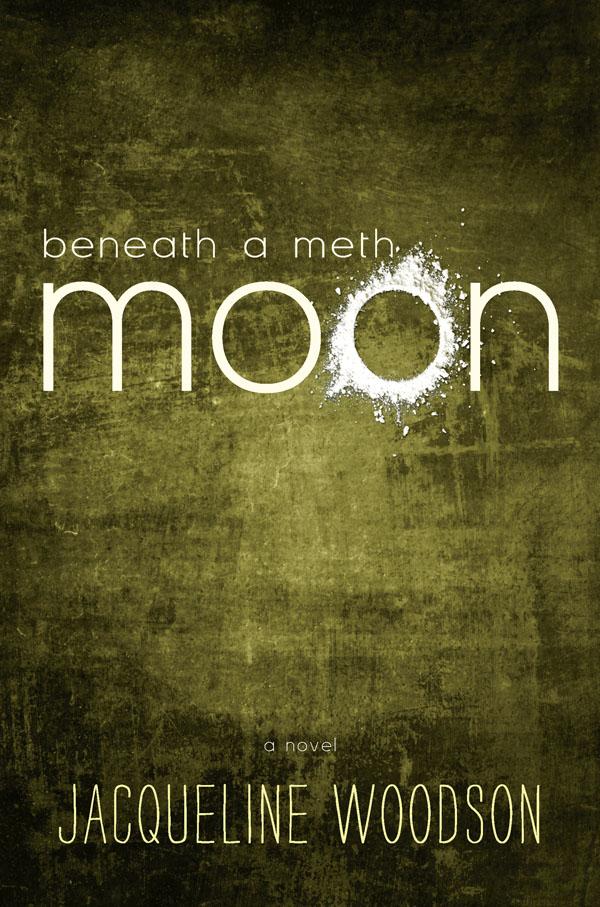 In one of my first grad classes, we read every book written by a few different authors. We read them in order. This is actually a really fun way to read, especially authors that have a lot of books and are still writing. It gives you a unique perspective on each successive book.

I had never read Jacqueline Woodson before, but in 5 weeks or so I became a veritable Woodson expert. One thing I really enjoyed about Woodson’s works is that they could be considered “issue books” or “problem novels.” Interracial relationships. Child sexual abuse. Teen pregnancy. Being in the Witness Protection Program. Foster care. Being orphaned. But the thing is, Woodson’s books never *feel* like they are books about these issues. They feel like you’re reading damn good writing.

In Beneath a Meth Moon, the issue is drug abuse. Crystal meth. Laurel is new in town, still recovering from the loss of her mother and grandmother in Hurricane Katrina. She wants to make a new friend, so she joins the cheerleading squad. She wants someone to kiss after basketball games, so she starts dating the team co-captain. She wants to feel good, feel happy, so when her new boyfriend offers her a taste of what they call Moon, she takes it, and she likes it. Not long after, she’s under its spell.

Books about teen drug use easily slip into that *PROBLEM NOVEL!!* trope. As much as I love Go Ask Alice for being ridiculous and campy and awesome, other books about teen drug abuse tend toward the Afterschool Special, or focus not on the descent but on rehab. Woodson, instead, captures Laurel’s unintentional slips, her small decisions and desires that led her down a bad path, and how her grief weaves through her every move.

As usual, Woodson’s prose is lyrical and the story slim, just under 200 pages. She flies under the popular radar sometimes, but Woodson is a proven talent. I don’t think you have to read all of her books to appreciate Beneath a Meth Moon as much as I did but once you’re done you might want to.