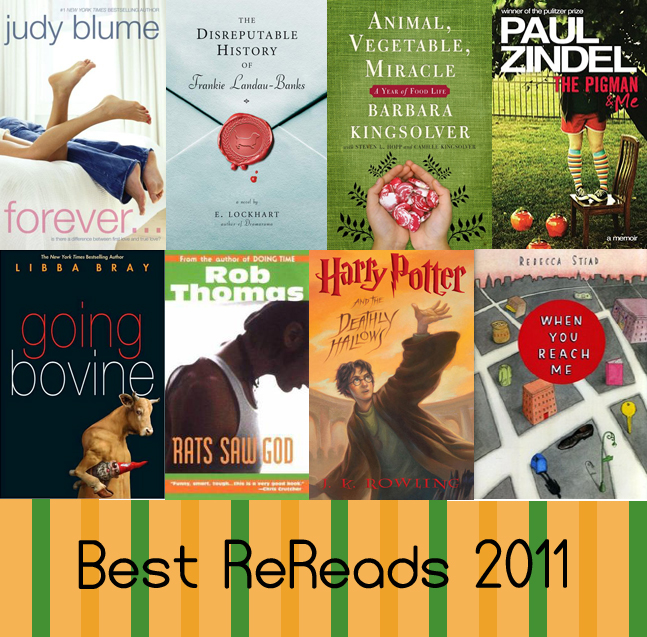 Ah, I used to really enjoy some Judy Blume when I was a child. Just As Long As We’re Together. Are You There God, It’s Me Margaret? I’ve read Summer Sisters more times than I can recall. Mmm. But despite my prodigious love of Ms. Blume, reading Forever still makes me think:

Judy Blume, you are a bad. ass.

This book is a like, no holds barred teenage love. Even 30+ year after its publication, and after countless other sex-fueled YA novels, it still feels kind of racy. And call me a sucker, but even after so many re-reads, I still root for Katherine and Michael to stay together. For Ralph’s sake.

Okay fine, I just like making Ralph jokes. So sue me.

The Disreputable History of Frankie Landau-Banks by E. Lockhart

This book came in the middle of my Spring syllabus, like a breath of fresh air in the midst of a pile of rotting corpses.

Really, though. We read a book about a pile of rotting corpses. Gross.

This is one of my all time favorite books, and it stands up to multiple re-reads, sucking me in every time.

I think I may read this book once a year, every year until I die. I am especially fond of the audio, read by the author – it’s great to listen to in late March, early April. It’s getting a bit warmer, you’re thinking about fresh produce again, you’re walking around out of doors again, enjoying nature…

oh good grief, I am annoying.

I liked this book the first time around, but I found it easy to pseudo-skim. Not skim-skim… I am not great at skimming. But a pseudo-skim is more like “I’m reading, I get the plot, but I’m not really focusing enough to really get what’s going on.” The nice thing about Going Bovine is that even doing a pseudo-skim, the book is enjoyable. Lots of plot-twists and jokes etc. But on my second read, I slowed down and found the novel to be this labyrinth of mythology and symbolism and weird allegories… so bizarre but so complex.

Hardly anyone in my class liked it though! What is their problem?

The Pigman & Me by Paul Zindel

This was one of my favorite audio books as a child, and I re-listened to it this year for the nostalgia of it. This is Paul Zindel’s autobiography – mostly a tale of his slightly unbalanced mother who dragged Paul and his sister from town to town and engaging in hijinks that ranged from the-stuff-of-sitcoms (getting so obsessed with Lassie she starts breeding Collies, improperly bug-bombing their house, etc) to completely tragic (threatening to kill herself when the kids act up). This is a great tween-age gem, I think: Paul is on the brink of deciding what to do with his life, about to become a teenager, but he’s trapped in a family and living situation that he alternately loves and hates. The rawness and the humor reminded me of Jack Gantos… or rather, Jack Gantos should have reminded me of Zindel.

This is my #1 most recommended, most lent, most given away book. We have owned a few copies in my household – all grungy and yellowed, some of them library rejects because we dogeared them so much they needed to be withdrawn –  and I think I just bought another because I left them all in Michigan. I recommend it a lot because it’s a solid YA novel that isn’t too whiny, fluffy, or girly, and also because I can trick Veronica Mars fans into reading it by throwing the name “Rob Thomas” about.

This year, I wrote a paper on it! I think this fulfills my lifetime dream of academicizing every book from my childhood that I adored. This paper was for my class all about THE BODY, and it was entitled “The Wildest, Largest Passions: The Male Perception of the Female Body in Young Adult Literature.” Sounds pretty racy, huh?

Once I was done, you know what I wanted to do?

I’ve been listening to them on audio, when I run/cook/clean. Oh, and when I fall asleep to drown out my neighbors, who have a tendency to choose my bedtime to park themselves in their own bed, directly below mine, and proceed to be noisy noisy noisy.

When You Reach Me by Rebecca Stead

I just finished a paper on this award-winning 2009 book, and while the paper was a fairly painful, convoluted affair, When You Reach Me was not. Mild spoiler: this is a book that once you get to the very end, you realize things about the stuff you’ve already read. So it was nice to read through again having the full picture. Also, Stead is just a fine writer. She can write romance into a tween-y type book that doesn’t seem forced or creepy. She can switch from prose that seem so mind-blowingly true you want to jot down quotes, to pre-teen mother-daughter angst, to goofy friend banter, and you don’t even know how it all flows, but it does. The buzz about this book when it was published was not just faddy chatter – this one has staying power.