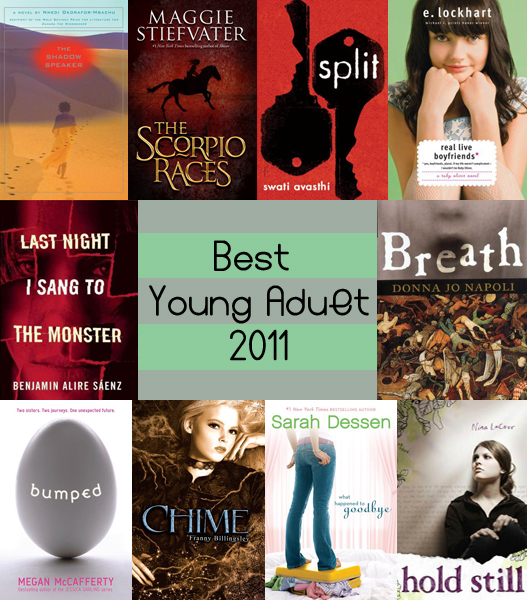 The Shadow Speaker by Nnedi Okorafor-Mbachu

If you are thinking that sci-fi/fantasy is a little too white, a little too European, a little too hyper-masculine, a little too predictable, then this is the book for you. Okorafor-Mbachu’s novel is set in post-nuclear Africa. A bizarre act of bioterrorism has left many children with supernatural powers, and perhaps also created some kind of space-time rift into another world. Protagonist Ejii, has a power that calls her to leave her family and follow Queen Jaa – this crazy, wild leader who has 2 husbands and who also beheaded Ejii’s father, years ago – into the desert. The ending was a bit over the top, but I really enjoyed being immersed in the non-Western mythology and navigating the mix of science and fantasy here.

The Scorpio Races by Maggie Stiefvater

I wrote a nice long review of The Scorpio Races for the Words on Paper book club. You should go read it, if you’d like, but here’s the short version:

Book about two teens who live on an island where every year, man-eating waterhorses rise from the sea… and instead of relocating to a safer home, the islanders capture these horses and race them.

Why I liked it, despite the man-eating-water-horses? Great setting, complex character relationships, and short chapters.

What? Short chapters are awesome! Leave me alone…

Ah, realism. There you are! This was a syllabus-book from back in March, but I still remember much about the characters and the story that really pulled me in. The novel opens with Jace knocking on his older brother’s door. His older brother – Christian – isn’t expecting Jace; they haven’t spoken in a number of a years after Christian left home, fleeing their father’s abuse. Christian lets him invade his tiny apartment even though Jace isn’t being particularly forthcoming about why he left home. Both Jace and Christian fight some very real demons from the past and present, and basically have to learn how to be family for each other when neither boy knows what that means. I found the relationship between brothers to be so touchingly honest and painful that I wanted to reach out and hug them both.

Look, guys. Y’all know I love E. Lockhart. This does not need to be reiterated. But, heck, every time I read these Ruby Oliver books, I feel like they are just some of the most underrated young adult novels of life.

Why do Ruby and her romantic debacles get the short shrift? Is it because Ruby’s books aren’t long enough? They are written in first person? She doesn’t have enough trauma in her life? Because the covers are cute and girly? Because there’s not a “cover plot” to disguise the romance?

I am not sure. All I know is that I was a little heartbroken to realize this was the last in the series. You had a good run, Ruby!

Last Night I Sang to the Monster by Benjamin Álire Saenz

This book has a lot of things I like. Psychological mysteries. Rehab & drug addiction. Emotional triumph. I read this book for my Realism class in the spring, during which we probably read every Most Depressing Book Ever, and Last Night I Sang to the Monster fit right in. But unlike many of our novels that semester, this book had me legitimately concerned about the protagonist’s future. Zach is in rehab, but doesn’t remember why or how he got there. With the help of his friends and therapist, his past starts to reveal itself, but it’s not good. So basically, this poor kid has to deal with addiction, with PTSD-amnesia, and figuring out what the hell to do with the rest of his life. All at the same time.

As a child, I eschewed many genres. This included every genre that Ms. Napoli usually writes, so I missed out on her retellings and historical treatments until reading The Smile a few years ago. The Smile – the story of the Mona Lisa – was good. I liked it okay. But Breath? Good God, I have no idea why I liked this book but I ATE IT UP, I really did. Maybe, in my old age, I am warming up to all sorts of genres!

Okay. Breath is a retelling of the Pied Piper of Hamelin, set in a German village in the 1200s. The main character, Salz, is a sickly, skinny teenager, which means that his burly older brothers resent him for getting out of chores and he generally feels out of place in his agrarian town. But then, everyone in town starts getting a strange sickness. Salz isn’t so much trying to solve the mystery of this illness as trying to survive and keep his family alive, but part of the fun of reading is trying to figure out why everyone is going berserk every night. Salz and his grandmother are also part of this pagan group that occasionally gets together to trip out on drugs and have a little rural bacchanal… so the whole of the novel – the plot, the setting, the historicity – I found completely and unexpectedly enthralling.

I had mixed feelings about this book when I read it back in May, but the more time I have to stew over it, the more impressed I am by McCafferty’s first foray into non-realism.

Bumped is, indeed, Yet-Another-Freakin’-Dystopia. The dystopic premise? Adults can no longer procreate, leaving teenagers to carry out the reproductive responsibility for the entire human race. The subsequent commodification and commercialization of teen pregnancy is fairly horrifying – i.e. prosthetic pregnant bellies are the new skinny jeans – but the story focuses on two particular girls who reside on opposite ends of the reproductive spectrum. Melody and Harmony are twins separated at birth; Melody is a career-bound goody two-shoes who has finally snagged a choice conception contract and is waiting for her reproductive agent to select a fitting partner for procreation. Harmony shows up on Melody’s doorstep unannounced, on unexplained leave from a religious compound where sex is reserved for marriage and babies are kept in the family (gasp!).

Wacky hijinks ensue. This is a fun premise for a dystopia, but more than that, after reading and thinking about dystopias for my SF/F class this semester, I started to see Bumped as more of a satire of other dystopias. McCafferty writes humor so well that she can pull this off, I think. I am looking forward to the sequel, coming out in April!

Boston Globe-Horn Book Award finalist. National Book Award finalist (after all the nonsense, anyway). Tons of starred reviews and blog buzz. After having renewed this book 5 times (aka an entire semester), I decided to run with my recent tolerance for the paranormal and read Chime.

I have to say, I was pleased.

I don’t want to reveal too much of the plot, but the book opens with our heroine, Briony, confessing to crimes unnamed, asserting her inherent wickedness, and asking to be hanged. It doesn’t take too much time to figure out that Briony probably doesn’t deserve to die, but it takes the entire novel to reveal exactly what crimes she committed, which ones she didn’t, and who is ultimately responsible for the lot of bad things that have happened to Briony and her family. But more importantly, to Briony anyway, is the Swamp Cough. The town children are slowly dying from a strange sickness that is baffling the doctors. Briony suspects that it has something to do with the spirits who live in the swamp, but she can’t figure out a way to negotiate with them without revealing that she can speak to them – and if she does that, she’ll be hung as a witch.

The last hundred pages of this book sped by. I predicted the ending fairly well, but not in a way that made me feel like it wasn’t worth the effort to read. More like I felt clever to have solved the mystery on my own.

Also, there is a fairly steamy, but non-cheesy romance, which I totally ate up. Yum.

What Happened to Goodbye by Sarah Dessen

Another great Sarah Dessen book. I’m not sure she can write anything I don’t like. Some books might be stronger than others, but they are all solid reads, in my opinion.

This chapter is about a girl, McLean, who lives “on the road” with her divorced dad as he fixes up dying restaurants. McLean reinvents herself at every port, doesn’t get vulnerable, remains pissed at her mom for ruining her family, etc. She meets a cadre of unlikely, plucky friends and of course, falls a little bit in love with a boy. There’s also city planning, blended families, and college basketball!

Really, though. Sarah Dessen, you are both my bread and my butter. Keep on keepin’ on.

As mentioned, I don’t get a lot of time to try out new authors. With limited time for reading, I usually stick to the especially buzzworthy, the tried-and-true authors, and re-reading favorites. So it’s a rare feeling for me to read a book and say to myself “hmmm… I want to keep an eye on this one.” Hold Still felt like a rare book, and I am indeed keeping an eye on Nina LaCour (new book, The Disenchantments, coming out in February.

Hold Still is about Caitlin, learning to recover from her best friend’s suicide. Caitlin is suddenly filled with regret, doubt, and complicity for being the best friend who didn’t realize her friend needed help. She herself begins to slip into a depressive state as she mourns her loss, but she does, eventually, begin to scrape her way out.

This sounds like a big fat downer of a book. And that’s true, actually. But it’s depressing like Laurie Halse Anderson’s Speak is depressing: raw, painful, but ultimately reminds you – the reader – that life is a big mess of goodness, badness, beauty, and pain, and we have to handle it all to survive.

Up next… Books for Adults!